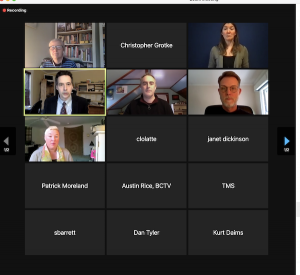 Water leaks and collapsing walls were part of  the first post-Daylight Savings Time regular meeting of the Brattleboro Selectboard.  The Department of Public Works reported on a couple of recent and ongoing emergency repairs downtown involving water.

The board heard an update on the work of the Windham Regional Commission, found out more about how poorly parking revenues are going this year, hired a company to do cemetery maintenance, and purchased some new playground equipment. And board members said goodbye to Brandie Starr and Jan Anderson, thanking them for their service.