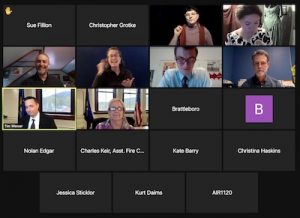 The Brattleboro Selectboard is easing into budget season while wrestling with the safety of retuning to in-person meetings. They got an update on the Water Treatment Plant upgrade, paid for some emergency repairs, gave out a liquor license, and discussed Town Manager Elwell’s final Long Term Financial Plan.

There was more safety – there will be new stop signs coming to some corners, a discussion of ARPA fund possibilities was quick, and a discussion of blinking crosswalks took quite a while.