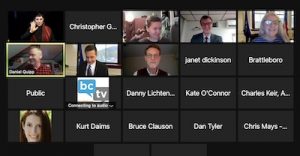 Promotion of Brattleboro was a primary topic at the regular meeting of the Brattleboro Selectboard Tuesday. Blue Whale Public Relations had some typical Zoom-related delays but otherwise gave a solid report on their early efforts to reach out to the media.

Hybrid meetings will continue for a while longer, favorable financing for the water treatment facility was announced, new stop signs are official, and Union Station might be sold for a dollar in order to save as much as $100,000.