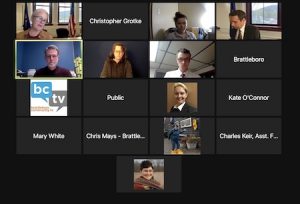 The Brattleboro Selectboard kicked off their FY23 budget season with an overview of the proposed town budget by Town Manager Peter Elwell. Questions were limited at this meeting, allowing the board and the public to take in a broad overview. Deep dive questions begin next week.

One of the lengthier passages in this meeting was a discussion of prepaid assigned funds compared to unassigned funds and how they both are accounted for legally and financially.