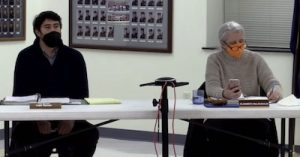 The Brattleboro selectboard had strong words for downtown property owners over sidewalk snow removal. It was a good old-fashioned Selectboard -DBA battle for a while there, when the downtown organization tried to pass responsibility for clearing snow to the Town.  No, insisted the board. Building owners have always been required to clear it, and if the downtown organization feels it is a shabby job, perhaps they should pay to use a more professional service. Take that.

They also raced through some public hearings, updates and reports.