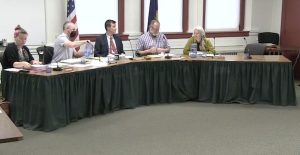 The Brattleboro Selectboard agreed to the Golden Cross contract addendum of a free 90-day extra staff and ambulance offer, which the Fire Chief explained came at his suggestion.

They also held a first reading about fines and penalties for rental housing violations, heard public comments about cameras, announced a possibility of a downtown police substation, learned about Tri-Park’s current situation, and more.