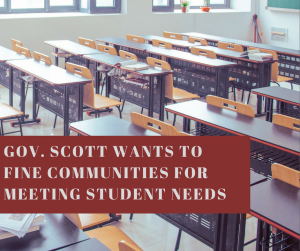 The legislative session is wrapping up and the budget is still on the line. The threats coming out of Gov. Scott’s office are terrible.

-Gov. Scott has said all year that he wants to level funding and impose strict staff ratios at our public schools.
-Townships met and voted on their budgets through Vermont’s democratic process. In most cases, including in Brattleboro, they followed Scott’s budgetary directive.
-This wasn’t good enough for Gov. Scott. He is now threatening to FINE communities (Yes, fine. As in make them pay the state money through tax penalties.) for failing to meet his arbitrary staffing ratios.

So basically, not only do Scott’s staffing ratios ignore the complex issues facing our schools as we struggle with the opioid crisis, Gov. Scott wants to undermine the democratic process in our communities.

Governor Scott wants to fine communities who participated in democracy and chose to value the educational needs of their students.

ACTION:
Please call Gov. Scott’s office and tell him to respect the wishes of local communities and preserve quality education in Vermont.
Phone: 802-828-3333

Suggested call script:
This is [name] calling from [address, town]. I am calling in response to Gov. Scott’s proposal to fine communities who do not meet his arbitrary staffing guidelines. Communities, who are most aware of the needs are their students, have already met and determine through democratic process what is best for their community. The Governor’s overreach is inappropriate and unacceptable. The best thing for Vermont’s communities are the decisions made by its citizens.