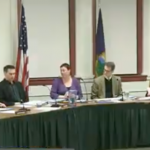 At their special meeting this week, the Brattleboro Selectboard decided to reverse a decision they made just last week and instead remain IN a second, national opioid lawsuit. A lawyer told them opting out wouldn’t be so smart.

Health and safety issues at local apartments, an effort to reduce the speed limit in West Brattleboro along Route 9, and discussions of the FY21 Police and Fire budgets rounded out the special meeting.