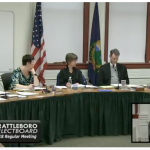 Flood plain models and measurements were at issue for a significant portion of the meeting, with little that could be done except make a federal case of the matter. In the end, an agreement to reach an agreement with a property owner was agreeable enough to allow the board to acknowledge the project they have no say in. It was that sort of an evening.

The skatepark approaches, but has not crossed, the fundraising finish line. A revised Town Plan is nearing completion, a re-application for the Downtown Improvement District relies on the Town Plan being approved, and the Heifers have permits to go strolling again this year.