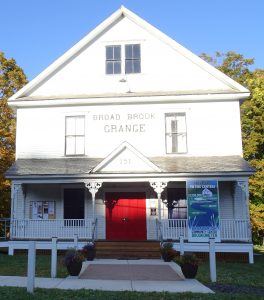 Broad Brook Community Center (BBCC) in Guilford has announced a winter fund drive to support the major phase of renovations this spring. Thanks to a matching gift challenge, all donations received by January 31, 2021, will be doubled.

The BBCC purchased the 1896 building from Broad Brook Grange three years ago, began raising funds for a complete renovation, and completed the first phase of work in 2018. The improvements particularly addressed accessibility and safety, and included a new entry ramp, ADA-compliant restrooms, and a fire escape.

The second and major phase of renovation, which will begin in March 2021, includes the addition of a full basement, full weatherization, a sprinkler system, and a lift to the second floor auditorium. Local contractor Mathes Hulme Builders is in charge of the renovation, working with plans created by architect Jon Saccoccio and site plans by Stevens Associates.

BBCC President Don McLean notes that a major portion of the total cost of the project has already been raised. “We covered the cost of our first phase, and are well on our way to funding Phase 2,” he said. “But we still have to raise over $700,000 more. We are grateful to an anonymous donor who has pledged to match up to $250,000 of gifts and pledges received by January 31. Guilford is a small town, and this is a big request, but the renovated building will truly be its year-round community center. We like to say that the plan is to have our 125-year-old building serve the town for another 125 years.”

McLean emphasizes that such popular events as the annual sugar on snow supper, dances, brunches, Tai Chi classes, workshops, community meetings, and theater productions, serve the “ Greater Guilford Area!” thus, donations from residents of nearby towns are most welcome. The building also hosts such important services as the Guilford Cares Food Pantry, Green-Up Day, and Primary and General Election voting.

In addition to donations from individuals, the project has received funding from Vermont Downtown Village Tax Credits, Preservation Trust of Vermont, Vermont Housing and Conservation Board, the Thomas Thompson Trust, the Windham Foundation, Vermont Community Foundation, the Crosby Gannett Fund, and Ben and Jerry’s. Don McLean continues, “We were particularly delighted to receive one of the first Paul Bruhn Historic Revitalization Grants, which honors the late director of the Preservation Trust. Paul visited our building several times, and was an enthusiastic supporter of our project.”