BRATTLEBORO—Amidst the organization’s many measures to prevent the spread of COVID-19, Groundworks Collaborative has pivoted to a virtual approach for their 8th annual Camp for a Common Cause fundraiser.

The event, which normally seeks a permit to lift the Town of Brattleboro’s public camping restriction for one night each May on the Brattleboro Common, will happen virtually this year on Friday, May 1st.  Organizers are encouraging participants to camp at home—on lawns, in garages, on balconies and decks, etc.—and in so doing, raise funds that Groundworks reports it needs “now more than ever.”

In preparation—and following the guidance recommended for homeless shelters and programs—Groundworks has taken a number of preventive and precautionary steps in response to COVID-19.  Our goal is to protect our community’s most vulnerable neighbors by responding with an abundance of caution, while not contributing to feelings of panic or fear.

Groundworks is working closely with State partners to ensure a strong local response to keep our shelter guests safe.  Our staff at both shelters are engaging in additional cleaning and sanitizing protocols, and we have limited access to restrict any external guests at any of our program sites.

Update: Not many people have asked for help here, but this has become a bit of a collection of useful information links, so we’re changing the title slightly.

The survey is here: http://bit.ly/townarticles2020

The survey asks your opinion on each article that will be voted on. Results will be shared with town reps, and also available to anyone.

When a criminal is acquitted of crimes, not because of innocence but because the legal system failed to do its job, it means that bad behavior has been rewarded. The U.S. Senate impeachment process (fake trial) has been a display of some of the most rotten aspects of a political and legal system in an advanced state of decay.

The criminal-in-chief will now feel emboldened to run roughshod over the rights of anyone who does not agree with him. He has been given carte blanche license to not have to follow any American laws because he knows that the Senate and his supporters have his back.

There is simply no way an impoverished and utterly demilitarized Nazi Germany, with no air force, a tiny navy, no armored vehicles, no heavy weapons and a tiny army, could have on its own, built its armed forces up to the most powerful military in the world during the first six years of Hitler’s rule of Germany in depression without the colossal and crucial investments in, and joint venturing by, top US
corporations

The American form of government is in an advanced state of decay. An argument might even be made that we are witnessing the final gasps of a failed centuries-long experiment. On the other hand, one might say that what we now have is just a logical evolution of a country created by slaveowners and an elite corps of wealthy white men. There are always many ways to look at events.

When the majority of people in a society are being used as pawns by a privileged few then I believe that the government has failed to uphold basic human values. If we want to nurture a democracy then we have to promote what is best for most of us.

One year to the day before Rev. King received a bullet to his head, bold headlines in overseas newspapers all around the world read, KING CALLS US “GREATEST PURVEYOR OF VIOLENCE IN THE WORLD.” The same morning, in the United States of Wars, Wall St. owned, CIA controlled, TV and newspapers, which all defended and praised the war in Vietnam, vilified King as a traitor of his country and an embarrassment to the African-American community 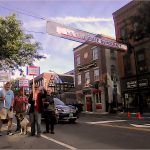 I will be taking the banner down to the fire company today so they can hang it over Main Street on Sunday the 19th at 8 am.
It is being hung to honor Martin Luther King and the many, many other martyrs to our great cause.

The murder of Iranian general Soleimani was a reminder that there are no moral or ethical boundaries that Trump will not cross. While politicians and the news media dance around the motive for the killing because they want to be fair until they have concrete proof, the rest of the world knows that the execution was a move calculated to divert attention away from impeachment.

As I was reading the New York Times last Sunday I could not find one story that had anything to do with impeachment. Trump successfully used murder to control the news cycle. He is not a complicated man. He acts impulsively and it was clear that he was becoming increasingly irritated at being trashed and constantly scrutinized for behavior that justified his impeachment by the U.S. House of Representatives.

It is not in the best interest of one’s mental health to take in too much news these days. It’s hard to get a clear perspective on national and world affairs because it is difficult to measure current events against past events and because of the proliferation of so many media forms.

Bad things have always happened in a lot of places around the world throughout human history but it seems that either a lot more bad things are happening now and/or we are more easily connected to the information that was not accessible only a few short years ago. Who knows?

When it comes to solving the irritating problems of daily life some of us are more persistent than others. I am one of those people who looks at all of the roadblocks to resolution as a challenge. Giving up is never an option. It means being labeled a pain in the ass, but it is a label I proudly embrace.

Recently, I was billed by Comcast for $108 in services I did not order. I don’t know how my account was compromised but, during the month of October, someone ordered on-demand movies and a streaming subscription.

Every so often we need to be reminded that the power brokers of the world are capable of
horrendous atrocities. The road to those atrocities is paved with unrestrained egotism, racism, misogyny, xenophobia and a disregard for the value of human life. World leaders become intoxicated with their power and as it goes unchecked they begin to believe that they can justify anything they do. Modern day examples are not hard to find.

As the U.S. impeachment process plays out it is important to realize that the current president has headed down a road that has led to the justification of the marginalization and torture of people not to his liking. This is the same road that was traveled by Hitler, Stalin, Mussolini and many others.

BRATTLEBORO, VT—Brattleboro’s Seasonal Overflow Shelter (SOS) will open Monday, November 18th.  After a successful first and second season located at the upper dormitory on the Winston Prouty campus (formerly the Austine School for the Deaf), Groundworks’ staff and Board are grateful for the opportunity to return to the space for a third year.

This year’s shelter will operate the same as prior years at this location: anyone seeking shelter will have to register for a bed through Groundworks Drop-In Center (at 60 South Main Street) between 9am and noon.  Access to the shelter will only be permitted through transportation provided by Groundworks.

It is possible that the Supreme Court may be poised to enable the Trump administration to decrease the U.S. population by 700,000 people and, in the process, ruin the lives of all of those Americans and their families.

The 700,000 are young people who were brought to this country at an early age by parents who were not American citizens. These innocents have been considered to be here illegally. President Obama realized the difficult situation these young people were in and in 2012 he established a policy labelled Deferred Action for Childhood Arrivals that is referred to as DACA.

There is a new kind of camaraderie that has developed among people who feel that standards of justice, morality and fair play have been lowered to an unconscionable level by Donald Trump. Those lower standards have not only affected Americans but they have colored political activity throughout the world. Hopefully, once Trump is out of power, those standards will be somewhat restored.

The new comrades of the 21st century have created something akin to a massive support group because they feel the need to share their pain. Many have resorted to professional therapists, and if anecdotal evidence is close to statistical fact, the number of people who have sought therapy since Trump was elected has risen significantly. 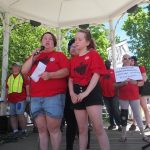 Do you and your family rely on Medicaid (Green Mountain Care) or Dr. Dynasaur? Do you have to buy private insurance, and worry about the rising costs? Do you have health insurance but avoid getting care because your deductible is too high? Are you dealing with medical debt? Do you have difficulty finding a primary care doctor?

Join others from the community at a public forum on the fight to protect Medicaid, keep local hospitals and clinics open, and fulfill the promise of universal health care in Vermont.

The southeast corner of Vermont, that includes Brattleboro and Windham County, is a unique place. There is an abundance of people whose sense of fair play compels them to put their money where their mouth is when it comes to commitment to social, political and economic issues.

Although there are what some might consider too many non-profit organizations, local people are generous and give time and money freely when they see a need. Windham County has a reputation of being a very liberal area and that has most people characterizing it as a harbor for activists who consider themselves far to the left on the political spectrum.

As part of the week of climate action, the Vermont Workers’ Center and Extinction Rebellion of Southern VT are sponsoring a screening of the film, “Strength of the Storm,” directed by Rob Koier. The screening will take place on Thursday, September 26th, 2019 at 118 Elliot Gallery (118 Elliot Street, Brattleboro) from 7:30pm-9:30pm, and will be followed by a discussion.

This film shows Vermont residents who were directly impacted by climate change during the flooding from Tropical Storm Irene, as they realized that they were all in this together and organized after the destruction of much of their mobile home community.