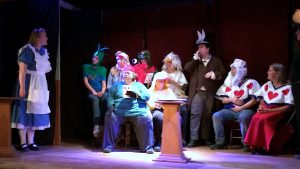 “Alice,” a Musical Play, opens the fifth season at Guilford Center Stage, on April 26-28, at the Broad Brook Community Center in Guilford. The work is performed as a tribute to an iconic 1978 outdoor production in Guilford. Performances are Friday and Saturday evenings, at 7:30 pm, and Sunday afternoon at 2 pm. Tickets are $12 general admission.

Richard Epstein directs this production, which features a cast of 18, performing 36 roles. Music director is Evelyn McLean, who reprises her singing role from the 1978 production, and also is costume designer for the show. Scenic design is by Ross Smart and Nancy Detra, with lighting by David Underwood. Tom Burrows is stage manager.

In keeping with its tradition of presenting plays which have a connection to the community, Guilford Center Stage chose this play to celebrate the memorable work of The Monteverdi Players, which presented large-scale outdoor theater in Guilford from 1975-1981. John Carroll was the producer and director of those imaginative shows.

In 1978, John Carroll teamed up with an earlier Carroll, Lewis, in his stage adaptation of “Alice in Wonderland,” which was performed on the Blair Farm, just up Carpenter Hill Road from the Broad Brook Community Center. The music for that production was by Nicholas Humez, then living in New England, and now residing in Ohio.

The Guilford Center Stage production is linked to that of 41 years ago in several ways: It uses John Carroll’s script, and Nicholas Humez’ score, which consists of some 40 minutes of songs and instrumental numbers. In addition, a few alumni of the earlier production are involved. As a further connection, the Mad Hatter will wear the hat created by Stacy Morse in 1978. The scope of the staging is notably different, as the 1978 show used a 100-acre “stage,” while the current production is contained on the intimate stage of the 1896 grange hall.

These actors will portray such famous characters as the White Rabbit, the March Hare and Mad Hatter, the Cheshire Cat, the Caterpillar, Mock Turtle, Gryphon, crabs and birds, and Pat Guinea Pig and the Mouse, as well as Alice, in her different sizes, her sisters, and their Tutor. Royalty will include the King and Queen of Hearts, along with the Knave and various playing card characters. The Duchess, the Cook and Frog and Fish Footmen, along with Bill the Lizard, round out the collection of those who will appear on the stage.

The theater is up a flight of stairs at Broad Brook Community Center, 3940 Guilford Center Road. General admission is $12 at the door, with cash or check accepted. Credit card advance tickets are available online from Brown Paper Tickets at guilfordstage.bpt.me or may be ordered at 1-800-838-3006. More information is on that site and at facebook.com/GuilfordCenterStage