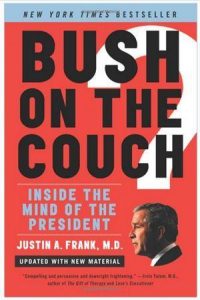 In 2005, Justin Frank, M.D., a psychiatrist , wrote a book “Bush on the Couch” in which he provided keen insights into the president’s mode of thinking-or not thinking.

Commenting on “W”, Dr. Frank noted we are “dealing with a potentially cornered man [who] could lash out, and it is possible that the best way would be to bomb Iran…. Whatever the root causes of Bush’s pathology, we have a dangerous man running things…grandiose and unchecked.”

“George W. Bush is without conscience…and destructive, willfully so. He has always likes to break things…most shocking is the way he is breaking our armed forces.

“He doesn’t care about others, is indifferent to their suffering…He is almost constitutionally missing the ability to sympathize or empathize…More indifferent to reality than out of touch with it, he makes up whatever story he wants.

“Ultimately, he is psychologically unstable…His goal is to destroy things [and he can do that] without experiencing anxiety or a sense of responsibility. An equally important goal is to protect himself from shame, from being wrong, from being found small and weak.” (Info courtesy of Ray McGovern)

I find it interesting that Frank could just as well have been writing about the current resident of the White House.
Well, in fact, he has done so. It’s called “Trump on the Couch” (Surprise, Surprise!)

Amazon says: “The New York Times-bestselling author of Bush on the Couch shows that Donald Trump is mentally and emotionally unfit to execute the duties of President.”

With our country itself at stake, Dr. Frank calls attention to the underlying narcissism, misogyny, deception, and racism that drive the President who endangers it. Using observations gained from a close study of Trump’s patterns of thought, action, and communication, he uncovers a personality riddled with mental health issues. His analysis is filled with important revelations about our nation’s leader, including disturbing insights into his childhood, his family, his business dealings, and his unusual relationship with alternative facts, including how

* The absence of a strong maternal force during childhood has led to Trump’s remarkable lack of empathy and disregard for women’s boundaries;
* His compulsion to polarize America has grown out of the way he perceives the world as full of deceitful and destructive persecutors;
* His inability to tolerate the pain of frustration has triggered his belief that omnipotence will finally remove it;
* His idiosyncratic use of language points to larger issues than even his tweets might suggest.
(Distilled from Amazon)

I’ve ordered the book. I’ll have more to say when I’ve finished it.