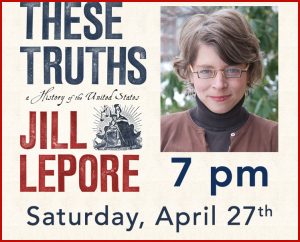 Her new book THESE TRUTHS offers a magisterial account of the origins and rise of our divided nation. This landmark one-volume American history—the first from a female historian, and the most ambitious in decades—is poised to influence other histories for years to come.

She writes in her introduction, “The American experiment rests on three political ideas—‘these truths,’ Thomas Jefferson called them—political equality, natural rights, and the sovereignty of the people,” each a “self-evident” law of nature. Lepore places this topic of truths, and the people who set out to define them, at the center of the American story, revealing how the ongoing tension in public life between fact and fiction—more relevant today than ever—has run through the tapestry of America’s five-hundred-year history like a long, dark thread.

She reminds us that the manipulation of truth is not a new phenomenon bred of the digital age. Reaching back to the very beginning, THESE TRUTHS commences with Christopher Columbus’s 1492 voyage to the New World to illustrate how the story of America has long been a tale of the struggle to control facts, truths, and even the historical record itself. Columbus’s written dispatches back to the Old World are Lepore’s first example—describing the indigenous Americans’ land, customs, and beliefs, and “claiming possession of their land, by the act of writing.”

The American story  is reframed by telling it through the eyes of figures too often missing from the standard narratives. She imbues her chapters with portraits of often unknown heroes, like the Quaker hunchback Benjamin Lay, torchbearer of the early abolitionist movement in Pennsylvania, or Abel Upshur, President John Tyler’s secretary of state, who was killed on an explosion on the USS Princeton, Lepore consistently finds minor characters to launch her arguments and reveals surprising twists to familiar stories.
Read more…