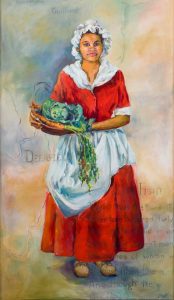 Through its statewide initiatives, the Vermont Partnership for Fairness and Diversity led by executive director Curtiss Reed Jr. provides expert training and coaching on inclusion, bias, and equity for a range of organizations, institutions, state agencies, and municipalities. Additionally, the Vermont African American Heritage has played a key role in illuminating Vermont’s African American history, a history that has often been overlooked.

In December, Mount Island announced a prize dedicated to celebrating the life of Lucy Terry and has recently extended the deadline to March 31. Mount Island, a literary magazine and small press dedicated to creating space for rural LGBTQ+ and POC voices, and to shifting dominant narratives about rural America.

Mount Island appreciates the contribution of the Vermont Partnership for Fairness and Diversity (VPFD) and Vermont African American Heritage Trail who supporting this work by making it possible for 15 poets of color to submit their work with the waved submission fee. These spots are available on a first-come-first-serve basis through the Mount Island website. If you, or anyone you know is interested, please visit https://mountisland.com/lucy to submit your best work (up to 3 poems).

We look forward to hearing from you and good luck!