Harry had flown all the way from New England to visit his son, Larry, and Larry’s girlfriend, Charity. Today, Harry left his walker in the narrow hotel  room, barely wide enough to get past the bed if you wanted to look out the window or use the small sink. The walker would have been easier on the street, but hard to bring down the four flights. There was no elevator, the historic building was still as it had been during the gold rush of ’06.

They were in the University District of this West Coast City, somewhat reminiscent of Portland, but bigger. Today was Thanksgiving, the street devoid of the usual crowd of students. Even the Vietnamese, Bubble-Tea places were closed. They had just emerged from the vegetarian Vietnamese buffet about a mile from Harry’s hotel, which fortunately was open today.

Harry made good time with the help of his solid hickory cane. He enjoyed getting ahead of his progeny and progeny’s significant other in their 20’s. When Harry had gotten about 30 feet ahead so it was safe to talk privately, Larry said to Charity: 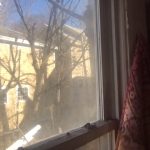 Melany Kahn’s passion for foraging led her to write “Mason Goes Mushrooming,” a new book for children, with illustrations by Ellen Korbonski, and it’s just been published by our local publisher Green Writers Press.

Tune in to hear some great stories of Melany’s early years horseback riding overland in West Bratt, being a family mediator in town…….and wild foraging in the woods!

Q. Why did the Neanderthals go extinct?

A. They could’t afford Paleo food. 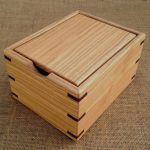 Get your hands on some wood and fire up your creative side in one of these June classes at HatchSpace!

Turn a French Rolling Pin (June 9), a great introduction to the lathe 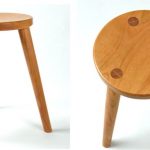 Have you been wanting to get started with woodworking as a hobby or side business? Take the first step at HatchSpace! We have a terrific beginners intensive course starting on Friday evening of this week, our Fundamentals of Woodworking class with member and RISD graduate Martin Simpson.

This introductory course is designed to give beginner students an overview of the safe use of some of the most common machines and hand tools used in woodworking. 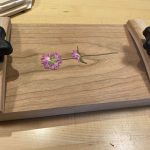 Tom has designed a workshop format in which participants get to practice their woodworking tool skills by using them in a repetitive fashion. Together, the workshop participants will make twenty 5 1/2″ x 11″ flower presses. Each participant will take home 2 presses – just in time for spring and summer blooms. 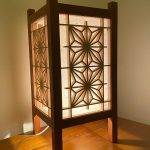 Join us at HatchSpace to explore this fascinating technique!

Kumiko is the Japanese technique of assembling wooden pieces to form patterns, without the use of nails or glue. The patterns range from very simple to very intricate. Kumiko panels can be used decoratively, to make lamps or screens and more.

It was a year like this one: very little snow in New England. All the local ski areas were hurting.

The Laurentians to our north, however, had plenty of snow.

Mt. Tremblant, 90 miles northwest of Montreal, was offering a ski week package and I decided to take advantage of it. 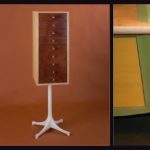 There are a few openings in HatchSpace’s upcoming classes for advanced beginner and intermediate woodworkers. 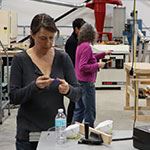 Master teacher and woodworker, Gail Grycel, is offering 3 Woodworking for Women classes this spring at HatchSpace.

Beginning Woodworking for Women
Learn basic woodworking skills in a safe and supportive environment. This class is designed for anyone who has had little or no experience working with wood or tools, or who wants a refresher.
2 groups offered. Each group meets for 8 sessions. 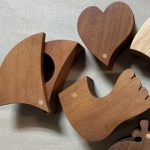 Only 2 spaces left in this fun class – Wednesday March 9, 1 – 5 pm . This project offers infinite design possibilities and is a fun and quick to make, using the bandsaw and drill press.  Register now at https://www.hatchspace.org/event-4715001 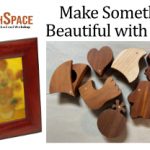 March at HatchSpace: Learn to use jigs for precision cuts, make a clever box or a gourmet rolling pin, or have fun with turning green wood!

Two Fun Projects
Pivot Top Box: A small project with infinite design possibilities! This great place for small keepsakes is fun and quick to make. The class will cover the safe and thoughtful use of the band saw and the drill press. 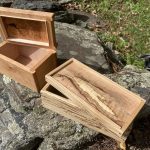 Come for some tablesaw practice, leave with an elegant little box!

In this workshop we will use the tablesaw to cut dados, rabbets, and some raised panels, and the router table for a little bit of detailing. 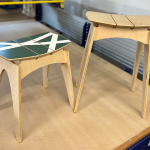 HatchSpace is offering 2 classes this month that introduce digital design and production for woodworking.  With “CNC” designs are created on a computer, which then drives a router to cut out the design on wood or other materials.

Make a Stool with CNC and Fusion 360

In this intro class to digital design and manufacturing, we will break into Fusion 360, a very powerful CAD software. You will be introduced to the basic user interface and be led through the steps of creating a 3D model of a stool. During the design process we will focus on designing the piece for cutting out on a ShopBot CNC Router. You will learn the safety and set up of the CNC router and prepare the machine and a file for a cut. Once cut, we will use a router table, sander, pocket hole jig to finish and assemble the stool. 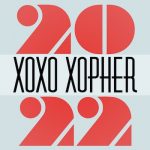 I released an album.

“But Chris, you aren’t a musician and don’t play in any bands.” Well, yes, technically that’s true, but let me explain.

Last year I read a book called “Prince and the Purple Rain Era Studio Sessions 1983 and 1984” by Duane Tudahl. The author goes day by day through studio logs and band member’s recollections and notes of every recording, rehearsal, and performance by Prince and his band the Revolution. 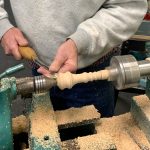 These classes filled up fast when offered in January, so we’re offering a second round in February!

Learn from the best!  HatchSpace instructors are experienced teachers, expert craftspeople and highly focused on safe shop practices. Classes are held in our new shop at HatchSpace, located at 22 High Street, Brattleboro VT.

These classes are suitable for beginners as well as experienced woodworkers who wish to learn new skills or refine existing skills.  Financial aid may be available, contact info@hatchspace.com for details. 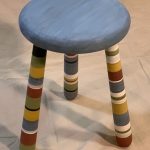 Join a woodworking class at HatchSpace for a great start on 2022. Many classes are suitable for beginners as well as experienced woodworkers.  Learn new skills from experienced instructors in a safety-focused environment.

Financial aid may be available, contact info@hatchspace.com for details.

“By the time a fool learns the game, the players have dispersed.”
African Proverb

Anyone else relates to that. . . or just me?

Traditionalists here are missing the old animated history calendar for the month of December. We are, too.

There is good news to report, though. A group of programmers has been working to build a Flash emulator to play old Flash-based content. The Internet Archive is using their work to preserve old Flash files, and they are also making it available to the rest of us.