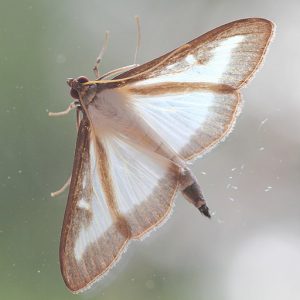 I was sitting in the window the other day looking out into yet another summer shower when I noticed a moth flapping around between the inner pane and the outer storm window.  As is typical for moths trapped in such situations, this one had flown all the way to the top of the window casing where it was beating itself against every surface trying to get out.  I felt for it but couldn’t figure out a way to get at it to effect a bug rescue.  As I pondered its dilemma, it occurred to me that the general tendency of most flying insects when trapped between window panes is exactly the wrong one for escaping that situation.  They always fly up where there is no way for me to open the window and let them out.

So after telling the moth to “Go down… go down…..” to no avail, I had turned the incident into a self-teaching moment, to wit:  if you find yourself beating your head against a wall without success, it might be good to try another approach — even the opposite approach — since the one you’re using clearly isn’t working and may never work.

Just as I thought that, the moth suddenly dropped abruptly from the top of the window frame to the bottom where the inner window was open wide enough for it to fly in.  It immediately flew into my chest and then bounced off where it settled onto the wall by my side as if to say, “Ok, I came down.”  Despite my amazement, I quickly opened the screen at the bottom and in the twinkling of an eye, the moth flew out and vanished into the early evening sky.

Although unexpected, in that moths don’t usually heed my instructions no matter how fervently I issue them, I took the incident to be confirmation of my earlier conclusion.  If at first and for a long while after you don’t succeed, try something different.  It might be just what’s needed to break the impasse and allow you to escape the confinement of your problem.

So, thank you, moth, for your instructive predicament.  I’m glad it worked out for both of us!