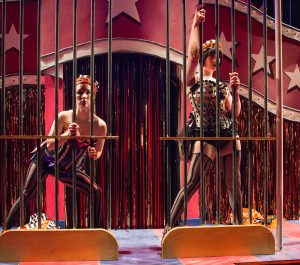 SAXTONS RIVER, Vt. – The cast is set, rehearsals are going full blast and tickets are on sale for Main Street Arts’ production of Chicago, which opens Thursday, Mar. 28 at the Bellows Falls Opera House for a two-weekend run.

The cast of the Jazz-age musical set in the Windy City’s Cook County jail includes Kyla White as the imprisoned Roxie Hart and Izzy Serebrov as the smooth-talking lawyer Billy Flynn, who works for her release by making the tabloids sympathetic to her plight.

David Stern is directing, with musical direction by Ken Olsson.

The story is a satire on the criminal justice system, with murderers turned into celebrities and the mantra “You can spin anything to get your freedom and celebrity.”

Roxie and her fellow inmates (all accused of murder) tell their stories in the “Cell Block Tango,” each justifying her actions because “he had it coming.”

White and Wendlandt are reprising roles they played in a production during their student days at Springfield High School, also directed by Stern.

Others in the cast include Libby McCawley and Marilyn Tullgren alternating the role of prison matron Mama Morton, who’ll do you a favor for a price. Also, Dom DiBenedetto as Roxie’s hapless husband Amos, Eric Walther as the master of ceremonies, and Connie Bryan, Gavy Kessler, Andrew Flaherty, Heather Martell, Zac Binney, Henry O’Connell, Victor Brandt, Brandon Norman, Ezra Leonard and Bronwyn Sims in other roles.

Choreography is by Annesa Hartman and Shoshana Bass.

With music by John Kander, lyrics by Fred Ebb and book by Ebb and Bob Fosse, Chicago was a hit from its Broadway opening in 1975 through its record-setting 1996 revival (still playing) and its status as the longest-running American musical in Broadway history. The 2002 film version won the Academy Award for Best Picture.

The show’s memorable numbers include “All That Jazz,” “When You’re Good to Mama,” “Razzle Dazzle,” and “Mr. Cellophane.”

Audiences are advised that the show features mild adult themes and the sound of gun shots.