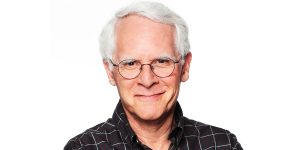 Next Stage Arts Project is delighted to present Rabbi-Comedian Bob Alper to celebrate the holidays on Thursday, December 19 at 7:30 pm. Tickets are $25 in advance, $28 at the door, available online at www.nextstagearts.org and at Turn It Up!, Brattleboro, the Putney General Store three weeks before the show.  Next Stage is located at 15 Kimball Hill, Putney, VT.

Bob performs all across North America and England, at corporate events, theatres, non-profits, conventions, private parties, churches, and, naturally, synagogues. And he’s done over 200 shows with his Arab and Muslim comedy partners, at a variety of venues, but primarily colleges and universities. The New York Times reported the comics “…had the audience convulsing.”

Bob’s 90-minute stand-up act is fast-paced, with impeccable timing and material that’s definitely sharp yet gentle and unhurtful. In addition, he offers an informative, hilarious event called “The Spirituality of Laughter,” which is particularly appropriate for religious organizations, civic groups, school and hospital in-services, etc.

The rabbi-comedian draws tremendous media attention, and, among others, has been seen on The Early Show, The Today Show, Good Morning America, Showtime, the BBC, CNN, and was featured on Extra, TV’s top-rated entertainment program, immediately following a segment on the size of Jennifer Lopez’s buttocks.

In addition to being a full-time stand-up comic and conducting annual High Holyday services, Bob is the author of three books that further showcase his considerable talents: Life Doesn’t Get Any Better Than This, an inspirational collection that The Detroit Free Press called “a volume of spiritual gems;” the award-winning full-color cartoon book A Rabbi Confesses; and the recently- published Thanks. I Needed That, more stories that touch readers with their warmth, humor, and wisdom. He’s also produced two best-selling comedy CDs as well as a DVD.

Next Stage Arts Project, winner of grants from the National Endowment for the Arts and ArtPlace America, is a non-profit organization, with the vision to be a beacon of artistic and cultural engagement, contributingto the economic vitality of our region and inspiring creative communities everywhere.Next Stage is fully accessible, with state of the art sound and lighting, comfortable seating, and great sightlines. There will be a beer and wine cash bar.

Information about upcoming events and more at: www.nextstagearts.org