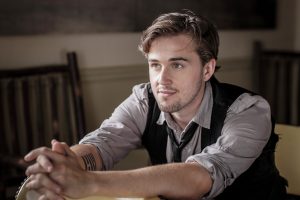 Next Stage Arts Project and Twilight Music present contemporary folk and pop singer/songwriters and multi-instrumentalists Seth Glier and Matt Nakoa at Next Stage on Friday, June 8 at 7:30 pm.

Singer, songwriter, pianist, guitarist, producer and Grammy nominee Seth Glier is renowned for his fearless vocal delivery, musical exuberance and seasoned songwriting beyond his years.  A troubadour in every sense of the word who averages over 150 live performances annually, 29 year-old Glier has gone from opening act to headlining his own shows and playing major festivals.  He’s shared the stage with artists as diverse as James Taylor, Ani DiFranco, Edwin McCain, Martin Sexton, Emmylou Harris and Ryan Adams, and has quickly become known for his passionate live sets and powerful command of both piano and guitar.  The last few years have also garnered Seth musical placements on television (Lifetime and Bravo), as well as slots on the Cayamo Cruise, at the Penang Jazz Festival in Malaysia and as a performer for former House Speaker Eric Cantor.

Glier’s new album “Birds,” his fifth on Mpress Records, is steeped in conflict and contradictions.  There’s grief and loss, but also strength and resilience; doubt and dismay, but also a sense of optimism as Glier confronts heavy topics and wrestles them into the daylight.  The songs on “Birds” range from personal to political, and are bound together by the awareness that our world is a fragile place that is all the more magical for it.

As a national spokesperson for ChildFund International and an advocate of Musicians On Call, and with a ROCK THE VOTE Road Trip 2012 stop under his belt, Seth has become increasingly comfortable expressing his social beliefs, both onstage and off.  In 2012 he took home Best Social Action Song for his track “The Next Right Thing” at the 11th Annual Independent Music Awards, his second IMA win.

Matt Nakoa grew up on a small goat farm in Smyrna, NY and began composing music as a teenager.  Following a formative stint as a classical pianist, Matt won scholarship to attend Berklee College of Music in Boston.  There he studied alongside soon-to-be Grammy winners St. Vincent and Esperanza Spaulding among others.  After college, Matt toured with his band “The Fens” and eventually landed in New York City’s vibrant piano bar scene, quickly becoming a star performer at Manhattan’s Brandy’s Piano Bar.

Matt’s first solo album “Light In The Dark” is an eclectic pop opus.  In contrast, “A Dozen Other Loves” explores a simple acoustic palette.  This intimate collection has earned many songwriting awards, including a win at Kerrville Folk Festival’s prestigious New Folk Competition.  Additionally, Matt’s piano music has received favorable reviews in publications including The New York Times, and his film scoring has been featured by Disney.  Matt now tours internationally, recently performing at The White House, throughout India, and regularly with folk music icon Tom Rush.

“Nakoa does not disappoint. In fact, between his piano chops, charismatic stage presence, and heartfelt originals on guitar, he drops jaws.” – The Boston Globe

Next Stage is located at 15 Kimball Hill in downtown Putney, VT.  Tickets are $18 Advance / $22 At the Door.  For information, call 802-387-0102.  Advance tickets are available at www.nextstagearts.org, Turn It Up in Brattleboro and Putney Food Co-op in Putney.  For more information, visit www.sethglier.com, www.mattnakoa.com, www.twilightmusic.org and www.nextstagearts.org.