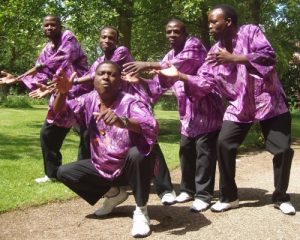 Next Stage Arts Project and Twilight Music present an evening of traditional song and dance from southern Africa by Black Umfolosi at Next Stage on Friday, August 24 at 7:30 pm.

Black Umfolosi is a self taught A cappella (Imbube) singing and traditional dance group that was formed in 1982 by school friends in Bulawayo, Zimbabwe who wanted to develop themselves and contribute to their community.  They named themselves after the Umfolozi Omnyama River in South Africa, where their ancestors can be traced.  Specializing in imbube music, gumboot dance and Zulu dance, Black Umfolosi has since toured internationally, enchanting people of Europe, USA, Canada, Australia and Asia with their fantastic harmonies, energetic dancing and gentle humour.  Black Umfolosi has also represented Zimbabwe at international events such as Expo 1992 in Seville, Spain and the 1994 Commonwealth Games in Victoria, Canada.

Black Umfolosi’s performances are energy driven and completely engaging, mixing a great gentleness of spirit and song with an exuberance in dance.  Their trademark harmonies, intricate rhythms, clicking and clapping are highlighted during their brilliantly choreographed shows with a full range of movements from subtle to vibrant stomping and leaping.  Their famous Gumboot Dances showcase the traditional styles and rituals of the South African mining regions.