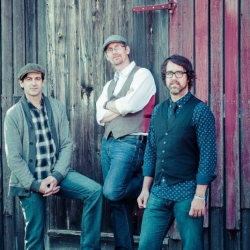 Next Stage Arts Project and Twilight Music present folk/rock quartet The Sweet Remains, featuring singer/songwriters Rich Price, Greg Naughton and Brian Chartrand, at Next Stage on Sunday, February 24 at 7:30 pm.  Based in Burlington, VT, NYC and Phoenix, AZ, the trio has formed a unique musical kinship around three-part harmonies and shared songwriting that transcends geography and three solo careers.

Celebrating 10 years together and over 30 million Spotify plays in 2018, Rich, Greg and Brian each bring strong lyrical and melodic writing and lush harmonies to The Sweet Remains.  Rich and Greg first started collaborating for Rich’s 2004 Geffen Records debut – a CD that spawned his single “I’m On My Way,” featured on the multi-platinum “Shrek 2” soundtrack.  Rich has released four solo albums and written music for many high-profile film and television projects.  Greg’s indie-release “Demogogue & The Sun Songs” was co-produced by late Grammy-winning recording artist Phoebe Snow.  Also an accomplished actor and director, Greg wrote and directed the feature film “The Independents” based on his experiences with Rich and Brian in the music business.  Brian has independently released numerous albums as a solo artist and with his Arizona-based band “The Project,” and regularly tours in Europe.

With regular tours throughout North America and Europe, three studio albums, one Live DVD and music that has been featured in commercials, feature films, television and covered by numerous artists, Rich, Greg and Brian added a feature film to their long list of the band’s accomplishments in 2018.  “The Independents,” a musical comedy-drama created by and starring the Sweet Remains, debuted at the Santa Barbara Int’l Film Festival, and will be released nationwide in 2019.