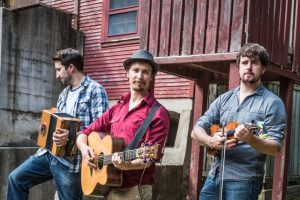 Next Stage Arts Project and Twilight Music present an evening of traditional Celtic and folk music from Ireland and New England by County Clare-based trio Socks in the Frying Pan and fiddler/singer Zoe Darrow at Next Stage on Sunday, March 24 at 7:30 pm.

Socks in the Frying Pan is a multi-award winning trio from the west coast of Ireland, the universal hub of Irish traditional music.  Their dynamic vocal harmonies, virtuosic musical ability and onstage wit have captivated audiences the world around and earned the band critical acclaim and accolades including the Irish Music Association “New Band the Year” award.  With their personal flair, contemporary style and energetic approach to music, Aodán Coyne on guitar and vocals and brothers Shane and Fiachra Hayes on accordion, fiddle and banjo make traditional Irish melodies their own.

Socks in the Frying Pan has toured internationally, headlining festivals from Walnut Valley in Kansas to Tonder in Denmark to Fleadh Cheoil in their hometown of Ennis, Ireland.  Starting in Corvallis OR and ending in Putney, VT, their winter 2019 US tour takes them to venues in the Pacific Northwest, the Midwest, Texas and the Northeast.  The band has released three CDs, and Aodán and Shane have solo albums, but it’s their love of live performance that makes this trad trio “Simply Stupendous” (Irish American News) as “they wrap traditional Irish tunes in modern garments and spice them up with driving grooves” (Folkworld)

Fiddler and singer Zoe Darrow is a musician of rare intensity and expressive range who grew up playing Cape Breton and other Celtic music on a sheep farm in Blandford, MA, and graduated from Mount Holyoke College with a degree in anthropology and music.  She released her first recording in 2001 at the age of 12, with her band the Fiddleheads.  The Valley Advocate named them “Best Celtic Band” in 2007, and Celtic Heritage Magazine acclaimed Zoe as an artist “destined to add savory spice to the global mix.” She has toured and recorded with the likes of Tony Trischka, Tim Eriksen and Peter Irvine.

Next Stage is located at 15 Kimball Hill in downtown Putney, VT.  Tickets are $20 Advance / $24 At the Door.  For information, call 802-387-0102.  Advance tickets are available at www.nextstagearts.org, Turn It Up in Brattleboro and Putney Food Co-op in Putney.  For more information, visit www.socksinthefryingpan.com, www.zoedarrow.com, www.twilightmusic.org and www.nextstagearts.org.