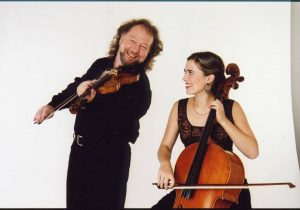 Next Stage Arts Project and Twilight Music present an evening of cutting edge fiddle and cello explorations of Scottish, Celtic and global music by Alasdair Fraser and Natalie Haas at Next Stage on Thursday, April 11 at 7:30 pm.  With a shared passion for improvising on the melody and the groove of traditional tunes, Alasdair and Natalie feature dazzling teamwork, swapping melodic and harmonic lines and trading driving rhythmic riffs.   “…soaring sustains, windswept refrains, and sudden, jazzy explosions. Their sound is as urbane as a Manhattan midnight, and as wild as a Clackmannan winter.” — Boston Globe

The 16-year musical partnership between Alasdair Fraser and Natalie Haas is the fulfillment of Fraser’s long-standing musical dream to return the cello to its historical role at the rhythmic heart of Scottish dance music. In the last 100 years, piano and accordion have largely replaced the cello’s gorgeous melodic tones and percussive energy as fiddle accompaniment in traditional music.  Alasdair and Natalie’s debut recording “Fire & Grace” won not only critical acclaim, but also the coveted the Scots Trad Music “Album of the Year” award, the Scottish equivalent of a Grammy.  The duo has represented Scotland at the Smithsonian Museum’s Folklife Festival, and has been featured on nationally broadcast Performance Today, the Thistle & Shamrock and Mountain Stage.

Long regarded as Scotland’s premier fiddle ambassador, Alasdair Fraser has a concert and recording career spanning over 30 years, with a long list of awards, accolades, television credits and feature performances on top movie soundtracks (Last of the Mohicans, Titanic).  Fraser has been sponsored by the British Council to represent Scotland’s music internationally, received the Scottish Heritage Center Service Award for outstanding contributions to Scottish culture and traditions and is a member of the Scottish Traditional Music Hall of Fame.  Through two summer programs that he founded two decades ago, the Valley of the Moon Scottish Fiddling School in California and a week-long course on the Isle of Skye, Alasdair has inspired hundreds of aspiring and accomplished musicians.

California–based cellist Natalie Haas first attended the Valley of the Moon Scottish Fiddling School at age 11, and responding to Fraser’s challenge to find and release the cello’s rhythmic soul, she played her first concert with him four years later.  A graduate of the Juilliard School of Music, she has performed and recorded with a who’s who of the fiddle world including Mark O’Connor, Natalie MacMaster, Irish supergroups Solas and Altan, Liz Carroll, Dirk Powell, Darol Anger and many more.  Now regularly touring with Fraser and creating a buzz at festivals and in concert halls throughout Europe and North America, Natalie is in the vanguard of young cellists who are redefining the role of the cello in traditional music.

Next Stage is located at 15 Kimball Hill in downtown Putney, VT.  Tickets are $24 Advance / $26 At the Door.  For information, call 802-387-0102.  Advance tickets are available at www.nextstagearts.org, Turn It Up in Brattleboro and Putney Food Co-op in Putney.  Next Stage will provide a wine and beer cash bar.  For more information, visit www.alasdairfraser.com, www.nataliehaas.com, www.twilightmusic.org and www.nextstagearts.org.