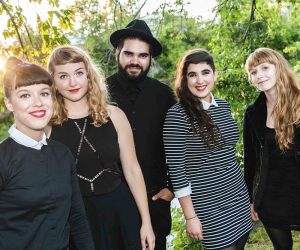 Next Stage Arts Project and Twilight Music present an evening of traditional and contemporary Scottish, Quebecois and world music from New England and Canada by Les Poules à Colin and Pipers Den at Next Stage on Friday, May 17 at 7:30 pm.

Les Poules à Colin is a Montreal-based quintet that, despite the young ages of its member (22 to 27), has been touring Canada, the US, Europe, the UK, Australia and Africa for over eight years.  Their sound seamlessly blends music drawn from some of Quebec’s finest trad musicians with North American influences that range from old-time to jazz.

Les Poules à Colin’s adaptations of traditional songs from Quebec, Brittany or Louisiana speak eloquently to their generation while retaining the beauty of timeless music.  Their repertoire is a mix of original and traditional songs, primarily in French but with some English compositions, that showcase their vocal, instrumental and rhythmic prowess.  With fiddle, guitar, lapsteel, banjo, mandolin, piano, bass and foot percussion, Sarah Marchand, Béatrix Méthé, Éléonore Pitre, Colin Savoie-Levac and Marie Savoie-Levac reveal a unique and modern perspective on traditional Québec culture.