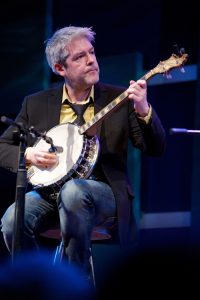 Next Stage Arts Project and Twilight Music present The Seamus Egan Project, featuring the longtime leader of the legendary Irish-American band Solas, at Next Stage on Saturday, July 6 at 7:30 pm.  Beginning with tunes from his groundbreaking 1996 album “When Juniper Sleeps,” which was the impetus for the formation of Solas, through music from his 20-year career with that iconic band, and adding some brand new tunes, Seamus, with Owen Marshall, Kyle Sanna and other musical friends, will continue to explore the further reaches of the Irish tradition and beyond.

From his beginnings as a teen prodigy, to his solo work with Shanachie Records, to his founding of Celtic powerhouse band Solas, to his current work as one of the leading composers and interpreters of the tradition, multi-instrumentalist and vocalist Seamus Egan has inspired multiple generations of musicians and helped define the sound of Irish music today.  As a multi-instrumentalist, he’s put his mark on the sound of the Irish flute, tenor banjo, guitar, mandolin, tin whistle and low whistle.  As a composer, he was behind the soundtrack for the award-winning film “The Brothers McMullen,” co-wrote Sarah McLachlan’s breakout hit “Weep Not for the Memories” and has scored numerous documentaries and indie films.  As a bandleader, he has helped make Solas the pre-eminent Irish-American band of its generation for the past 20 years, continuously renewing Irish music with fresh ideas, including a collaboration with Rhiannon Giddens on the 2013 album “Shamrock City.”

The Seamus Egan Project introduces fans to the entirety of Seamus’ immense and influential catalog of music, as well as to new music that he’s never recorded or performed live.  Revisiting his music with Solas, and focusing on his three solo albums released before Solas, Seamus looks back to that initial burst of creativity that followed the breathtaking four All-Ireland Championships he won on four different instruments by the young age of 14, and his turns as a star soloist in his later teens with Mick Moloney’s The Green Fields of America.  Growing up under the wing of powerful elder musicians, Egan has always paid homage to his roots, but he’s thought of these roots less as a heritage and more as a universal language to be shared.

Next Stage is located at 15 Kimball Hill in downtown Putney, VT.  Tickets are $22 Advance / $25 At the Door.  For information, call 802-387-0102.  Advance tickets are available at www.nextstagearts.org, the Putney General Store and Turn It Up in Brattleboro and the Putney General Store in Putney.  Next Stage will provide a beer and wine cash bar.  For more information, visit www.seamuseganproject.com,  www.twilightmusic.org  and www.nextstagearts.org.