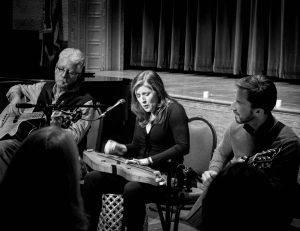 After a year and a half of rehearsing, researching and listening again and again to the breakthrough album,Ness (vocals, dulcimer, piano), Wysocki (bass) and Bellerive (guitar) first performed “Blue” in Hartland, VT in November, 2018, three days after Joni Mitchell’s 75th birthday. In addition to singing all ten songs and playing piano on four, as Mitchell did, Oberlin-trained opera singer Ness learned to play an Appalachian dulcimer for “All I Want,” “Carey” and “California.”  The trio begins their performances with videos of Joni Mitchell, and a discussion of her musical language (open tunings, piano style), poetry and career.

Recorded in Los Angeles in 1970 and released in 1971, “Blue” represents a “turning point and pinnacle in 20th-century popular music” (New York Times – January, 2000). It was also rated the 30th best album ever made in Rolling Stone’s list of the “500 Greatest Albums of All Time,” the highest entry by a female artist. In July 2017, “Blue” was chosen by NPR as the greatest album of all time made by a woman.

Next Stage is located at 15 Kimball Hill in downtown Putney, VT.  Tickets are $20 Advance / $24 At the Door.  For information, call 802-387-0102.  Advance tickets are available at www.nextstagearts.org, the Putney General Store and Turn It Up in Brattleboro.  Next Stage offers a beer and wine cash bar.  For more information, visit www.twilightmusic.org and www.nextstagearts.org.