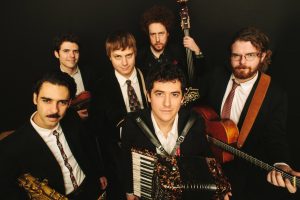 Next Stage Arts Project and Twilight Music’s “Rising Star” concert series continues with Sam Reider and The Human Hands, a “staggeringly virtuosic band” (RnR Magazine) of Brooklyn-based bluegrass and jazz musicians, plus Brattleboro-based world fusion duo Aura Shards, at Next Stage on Saturday, August 3 at 7:30 pm.  NSAP and Twilight Music are committed to supporting young, emerging artists, and the new series puts the spotlight on exciting, ready-to-be-discovered performers who are appearing at Next Stage for the first time.

Sam Reider is an accordionist, pianist, composer, educator and singer/songwriter who grew up in San Francisco, the son of a musical theater composer and klezmer musician.  He’s been featured at Lincoln Center and on NPR, and has collaborated with pop, jazz and folk musicians around the world.  Representing the U.S. Department of State as a musical ambassador, Reider has travelled to China, Laos, Cambodia, Myanmar, Vietnam, Estonia, Turkey and Azerbaijan.  He leads ongoing performances for public school students throughout the New York City area in partnership with Jazz at Lincoln Center, and has designed curricula and taught courses at the Stanford Jazz Festival, San Francisco Jazz and other private institutions around the country.

Since the 2018 release of their critically-acclaimed record “Too Hot to Sleep,” Sam and the Human Hands have appeared at major festivals and venues throughout the US and the UK, and performed live on the BBC.  Irresistible melodies, fiery improvisation and otherworldly sounds collide in what Songlines Magazine has dubbed “mash-up of the Klezmatics, Quintette du Hot Club de France and the Punch Brothers.”  “Too Hot to Sleep” features Eddie Barbash (The Late Show with Stephen Colbert, Jon Batiste and Stay Human) on saxaphone, Alex Hargreaves (Turtle Island Quartet, Live From Here, Sarah Jarosz) on violin, Dominick Leslie (Hawktail, Ricky Skaggs Band, Deadly Gentlemen) on mandolin, Roy Williams (Stephane Wrembel) on guitar, Grant Gordy (David Grisman Quintet) on guitar and Dave Speranza (Jim Campilongo) on bass.

Aura Shards is a world fusion project which explores the new and unique sound of the Hand Pan (aka Hang Drum), accompanied by a variety of ancient rhythmic and tonal instruments.  With all original compositions, Aura Shards weaves a big sound that is at once harmonically and rhythmically complex and engaging, while at the same time soothing, unobtrusive and meditative.  Aura Shards is Anders Burrows (Hand Pan, Didgeridoo, Djembe) and Jed Blume (Hand Pan, Tabla, Djembe).

Next Stage is located at 15 Kimball Hill in downtown Putney, VT.  Tickets are $20 Advance / $24 At the Door.  For information, call 802-387-0102.  Advance tickets are available at www.nextstagearts.org, Turn It Up in Brattleboro and the Putney General Store in Putney.  Next Stage will provide a beer and wine cash bar.  For more information, visit www.samreidermusic.com, www.jedblume.com, www.twilightmusic.org and www.nextstagearts.org.