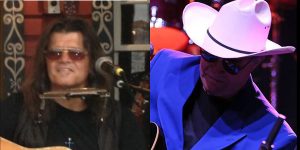 Next Stage Arts Project presents Blues & BBQ with Texassippi Soul Man Danny Brooks and Li’l Miss Debi and Blues Blast Music Award nominee Sunny Lowdown at the Next Stage Café, on Saturday, September 21. BBQ by Top of the Hill Grill will be for sale starting at 6 pm, with music starting at 7 pm. Admission is $10 in advance available online at nextstagearts.org or at the door. Next Stage offers a beer and wine cash bar, and there will be a dance floor.  Next Stage is located at 15 Kimball Hill, Putney, VT. For more information, visitinfo@nextstagearts.org.

Danny Brooks’ crackling, soulful voice is a force to behold.  His blend of soul, blues, Americana and gospel has attracted such great producers as Jim Dickinson and Johnny Sandlin, who have worked with everyone from The Rolling Stones to The Allman Brothers. Brooks has recorded with the Muscle Shoals Rhythm Section and contributed a track to Garth Hudson’s “Canadian Celebration of The Band”.  After years of honing his writing and performing skills in Canada and picking up nominations and awards along the way, Brooks now makes his home outside of Austin, TX and travels throughout the USA. He is recognized as a prolific writer and dynamic live performer, sharing the stage with his wife Lil Miss Debi who sings and plays cajon/percussion while he plays assorted guitars/slide/cigar-box/stomp-board and harp-rack.

Brooks first performed in Vermont over ten years ago when he opened for gospel legend Marie Knight at a Brattleboro Community Radio event.  He has loved performing in the area ever since, and made his Next Stage Theater debut last year.

Before acquiring the nickname “Sunny Lowdown”, Sunny had achieved renown as Louis X. Erlanger, guitarist for the group Mink DeVille, during which time Mick Jagger called him one of his favorite guitarists. His guitar playing can be heard in many feature films and TV shows, including the popular Showtime series “Billions”.  Sunny’s latest release, “Down Loaded” was nominated for a 2018 Blues Blast Music Award.

Sunny Lowdown will open the show with a solo set and then join Danny Brooks on stage for his performance.

“Listening to Danny Brooks is like driving out of Memphis, TN on a sunny Saturday morning into the Mississippi Delta listening to WDIA. It’s one of those things where time stands still.”  — Greg Martin, Kentucky Headhunter

“The absolute best of them can make the blues fresh and engaging every time, for anyone. Sunny Lowdown does that…Drive, spirit, spookiness—all the elements are here.”  – Elmore Magazine