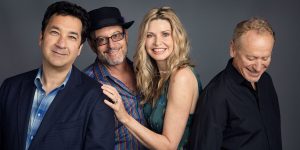 “In the last few years, the New Age genre has seen a critical reconsideration, with carefully curated compilations of historical material, while both veterans and descendants of the genre are creating new music that merits serious attention. A good example is the group FLOW, which includes none other than steel string guitarist WILL ACKERMAN, in a kind of New Age “supergroup.”  —Stephen Hill, Hearts of Space.

FLOW has returned to Imaginary Road Studios with producers Will Ackerman and Tom Eaton, and have recorded their new album, “PROMISE.”  They’ll debut new music from it at Next Stage!

Tickets are $28 in advance, $32 at the door, available online at www.nextstagearts.org and at Turn It Up! In Brattleboro and the Putney General Store.  There will be a beer and wine cash bar.  Next Stage is located at 15 Kimball Hill, Putney, VT.