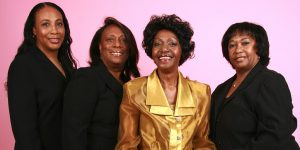 Next Stage Arts Project is thrilled to present Naomi Shelton & The Gospel Queens on Saturday, September 14 at 7:30 pm, returning to Next Stage after rocking the house for sold out crowds at their two previous appearances.

Naomi Shelton & the Gospel Queens are an American gospel and soul music group led by front woman Naomi Shelton. The group was formed in 1999. They have released two albums with Daptone Records, What Have You Done, My Brother? (2009) and Cold World (2014).  They have played main stages at some of the most prestigious festivals in the world, including Bonnaroo, The Monterey Jazz Festival, Montreal Pop, and The Ottawa Blues Festival.

“Shelton is delivering whip-smart soul with the energy of someone a third of her age.”  —THE LONDON TIMES

“Naomi Shelton is a power-house performer who sings with a passionate Baptist fervor.”  —MOJO

Though the music is most unapologetically gospel, most of the lyrics would fall under what could be called “message songs”.  That is, music containing uplifting spiritual messages, reminiscent of the more inspirational moments of The Staple Singers or Curtis Mayfield.  However, the relationship between gospel and soul music does not need to be discussed again here.  It is as plainly and naturally inherent in these grooves as it is in the singer’s every word and motion.  There is no one alive today that has a voice or spirit more capable of lifting an audience than Naomi Shelton.  Her grooves are pure Soul.

Next Stage is located at 15 Kimball Hill in downtown Putney, VT.  Tickets are $22 Advance / $25 At the Door.  For information, call 802-387-0102.  Advance tickets are available at www.nextstagearts.org, Turn It Up in Brattleboro and the Putney General Store in Putney.  Next Stage will provide a beer and wine cash bar.  For more information, visit www.nextstagearts.org.