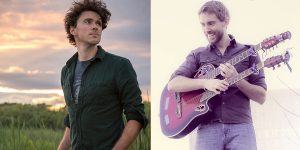 Next Stage Arts Project presents a double bill with pianist Ben Cosgrove and guitarist Mark Kroos at Next Stage on Friday, October 18 at 7:30 pm.

Ben Cosgrove is a traveling composer-performer whose music explores themes of landscape, place and environment in North America.  Ben has performed his “electric and exhilarating” instrumental music in every U.S. state except Delaware and Hawaii, and held artist residencies and fellowships with institutions including the National Park Service, the National Forest Service, Harvard University, Middlebury College, the Schmidt Ocean Institute and the Sitka Center for Art & Ecology.

His recent album “Salt,” which compares feelings of ungroundedness, loss and confusion to landscapes of flux and ambiguity, was described by Seven Days as a “majestic entry into the composer’s catalog… replete with near-imperceptible embellishments and forward-thinking concepts.”  Junction Magazine called the album “a poetry of tones and turns and motion and play that transcends the gross signification of everyday language,” and both Sound of Boston and Red Line Roots deemed it one of the best local releases of the year.

Mark Kroos plays 2 guitar necks at the same time.  Originally from Lansing, MI but currently based in Charlotte, NC, he is one of the only people in the world touring his trade.  His primarily instrumental style is characterized by open harmonies, polyphonic textures, incredible tapping technique, and is as entertaining to watch as it is to listen to.  Live performances burst with energy and magnetism not typical of solo guitar music.  Drawing influence from folk, Celtic, indie, and even punk rock artists as well as great guitarists such as Michael Hedges, Tommy Emmanuel and Leo Kottke, Mark Kroos has developed his own edge to the acoustic guitar.

In July of 2011 Mark competed in Guitar Player Magazine’s International Guitar Superstar Competition in Nashville for host Larry Carlton and renowned judges Muriel Anderson, Reeves Gabrels and Carl Verheyen, taking 1st place out of 5 invited competitors and thousands of others who had submitted online.  “Mark Kroos plays with a sensitivity to the music and positive energy that is truly refreshing.” – Muriel Anderson, 1989 International Fingerstyle Guitar Champion

Next Stage is located at 15 Kimball Hill in downtown Putney, VT.  Tickets are $20 Advance / $24 At the Door.  For information, call 802-387-0102.  Advance tickets are available at www.nextstagearts.org, Turn It Up in Brattleboro and the Putney General Store in Putney.  Next Stage will provide a beer and wine cash bar.  For more information, visit   www.bencosgrove.com, www.markkroos.com and www.nextstagearts.org.