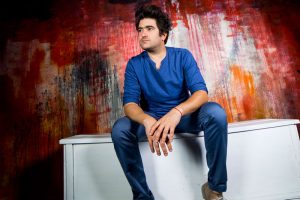 Cuban Music to infuse the VJC on Saturday, November 2nd as the Harold López-Nussa Quartet Takes the Stage on the First Night of their US Tour. Free Workshop on Cuban Jazz at 2:00 PM; Ticketed Concert at 8:00 PM.

The Vermont Jazz Center is excited to present pianist Harold López-Nussa and his all-Cuban quartet on Saturday, November 2nd as part of the VJC’s Emerging Artist Festival. This event is being held in memory of the VJC’s dear friend and generous patron, Jonathan Flaccus, whose passion for Cuban music and classic bebop as well as his generosity in assisting those in need has had a great impact on the Jazz Center. This is a rare opportunity to hear the López-Nussa Quartet live, as they are based in Cuba and are coming to the VJC as part of a tour that will take them to seven venues on the East Coast as well as performances in France and the United Kingdom.

Thanks to an Arts Impact Award from the Vermont Arts Council, the Harold López-Nussa Quartet will also be presenting a free workshop on the basic building blocks of Cuban jazz performance and style at the Vermont Jazz Center at 2:00 PM on Saturday, November 2nd.  This workshop is free and open to the general public. The López-Nussa Quartet concert at 8:00 PM is a ticketed event (tickets available at vtjazz.org).

The music performed by López-Nussa is infused with the danceable rhythms of Cuba. Downbeat Magazine writes: “López-Nussa’s single-note grace is akin to Herbie Hancock’s, and his two-fisted attacks are as joyous as Chick Corea’s!” He will be performing with Mayquel González on trumpet, Julio Céasar González on electric bass and his brother, Ruy Adrían López-Nussa, on drums and percussion. Although the members are quite young, this group has been playing together for 10 years.

According to Prensa Cubana “When López-Nussa first began to perform, many thought that he would devote himself only to classical music, given his great success, winning several national and international competitions.” López-Nussa was an exemplary student at Amadeo Roldán, the same prestigious conservatory where luminaries Gonzalo Rubalcaba and Chucho Valdez had also trained. López-Nussa performed with the Cuban National Symphony and the Matanzas Symphony Orchestra, garnered first place in the Ibero-American Piano Competition and was a finalist in the Città di Senigalia in Italy. Harold’s most recent album reached No. 1 on iTunes Jazz Chart and No. 2 on Amazon’s Jazz Chart. Recent performances at The Montreux, Monterey, Montreal and Tokyo Jazz Festivals, The Kennedy Center, and The San Francisco Jazz Center have fortified Harold’s reputation as a profound musician of rising stature who has fully integrated his classical training and love of the jazz continuum with his Cuban roots and soul.

López-Nussa’s trajectory as a strict classically-oriented musician shifted at the age 18 when he started playing and studying jazz seriously. In an interview from WGBH in 2017, he stated: “in Cuba there is no school that teaches this kind of music [jazz] and there was no access to the internet when I was growing up.” López-Nussa and his musician friends learned by listening to and transcribing jazz recordings that were shared amongst acquaintances who had visited the US. He says that at first he was “scared” by the freedom inherent in jazz-influenced improvisation, but after some time, he “grew to love” its openness and spontaneity. After becoming more confident with the language of jazz, its chords, scales and venerable history, he bridged the gap between the rich traditions of Afro-Cuban music and jazz. He was especially influenced by Cuban’s deep tradition of folkloric drumming, a passion he shares with his father and brother Ruy (the drummer in his Quartet).

As he matured, López-Nussa formulated his own, unique voice and in 2005 he earned first prize at the Montreux Jazz Festival’s piano competition. According to Prensa Cubana, “He won the first place in the competition demonstrating the breadth of his musical inspiration as well as his mastery of modern jazz and indigenous Cuban rumba.” López-Nussa is now recognized as one of a cadre of imaginative and creatively astonishing young Cuban pianists who seamlessly combine jazz with classical music and Cuban rhythmical features. This flourishing renaissance also includes pianists Alfredo Rodriguez, David Virelles, Manuel Valera and Elio Villafranca. JazzTimes Magazine claims that “Nussa is a genius in the manner in which he pulls together jazz, classical and traditional Cuban styles.”

According to his website, López-Nussa grew up in Centro Habana, a neighborhood known for its folkloric Afro-Cuban ceremonies. “There would be two or three ceremonies each week, and I could hear them from my house,” he recalled. “What I soaked in there has never left me.” In López-Nussa’s performances these sounds of Yoruban ritual fuse with the voices of Chopin, Thelonious Monk, Cuban popular song and Ernesto Lecuona (renowned Cuban composer) to form a delightful tapestry of technical prowess, creativity and unabashed delight.

Come to the Jazz Center on Saturday, November 2nd for two special events – a 2:00 PM workshop, free and open to the public, and a ticketed concert at 8:00 PM. Immerse yourself in a tapestry of warm-hearted sound created by López-Nussa who states “I’m very grateful that I play this music, because music makes our lives better.”

The VJC thanks Marcy Hermansader for sponsoring this event honoring the memory of Jonathan Flaccus for his sincere commitment to the arts and for his thoughtful recognition that the arts should be accessible to people of all demographics.

The 8:00 PM ticketed concert will likely sell out, so be sure to purchase tickets in advance. The workshop is free and open to the public, call 802-254-9088 to reserve your place or visit vtjazz.org. Young performers (under 21) are encouraged to bring their instruments.

The VJC is grateful for the support of the Vermont Arts Council Arts Impact Award and the Windham Foundation, who have assisted in funding the VJC’s Emerging Artist Series. The VJC is thankful for the ongoing support of Holiday Inn Express Suites of Brattleboro.  Publicity is underwritten by the Brattleboro Reformer, WVPR, WVEW, WNPR and WFCR. Thanks also to additional assistance from Edward Jones Investments and Mocha Joes Roasting Company.

Tickets for the Harold López-Nussa Quartet at the Vermont Jazz Center are $20+ general admission, $15 for students with I.D. (contact VJC about educational discounts); available online at www.vtjazz.org, by email at ginger@vtjazz.org, and at In the Moment Records in Brattleboro.  Tickets can also be reserved by calling the Vermont Jazz Center ticket line at 802-254-9088, ext. 1. Handicapped access is available by calling the VJC at 802 254 9088.

What: Quartet from Cuba performing Cuban and Jazz Standards as well as originals, grooves and improvisations. Free workshop at 2:00 PM, ticketed concert at 8:00 PM.