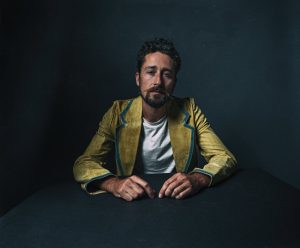 With warmth, wildness, unkempt vitality and sharply imaginative musicality, The Suitcase Junket works the border of Americana and rock, with image-driven songwriting, idiosyncratic storytelling and effusive vocal presence.  Artist, tinkerer, swamp yankee, singer/songwriter and multi-instrumentalist Matt Lorenz draws from a fantastically patchwork sonic palette, shaping his songs with elements of jangly folk, fuzzed-out blues, oddly textured psych-rock and dance-hall festivity.  From the salvaged sounds of American juke joints, back porches, honky tonks and rock clubs, his road-worn voice rises over instruments built of broken bottles, thrift store forks, dried bones, gas cans, shoes, saw blades, a toy keyboard, salvaged instruments and an overhead compartment’s worth of luggage.  Despite being deeply attuned to the chaos of the world, Lorenz brings joyful wonder to his music and makes an undeniable case for infinite curiosity as a potent antidote to jadedness and despair.

Growing up in Cavendish, VT, Lorenz began playing piano at age five, learned to sing by copying his sister Kate and later took up violin, saxophone and guitar.  While studying music and adaptive instrument design at Hampshire College in Amherst, MA, he taught  himself to throat sing and on graduation moving day, retrieved a worn, mold-filled guitar from a dorm dumpster.  He fixed it up, started pulling songs out of it and spent the next year playing music on the streets of Europe.  That was the beginning, and since then The Suitcase Junket has built a powerful fan base in his native New England and far beyond, performing at festivals including Mountain Jam, FloydFest, FreshGrass, Green River Festival, Hardly Strictly Bluegrsas, Joshua Tree and Winnipeg Folk.  His seventh and latest CD is “Mean Dog, Trampoline.”

Kate Lorenz and The Constellations features Kate (vocals,guitar) Ben Falkoff (guitar), Max Adam (vocals, bass) and Don McAulay (drums).  While studying abroad, Kate began performing with a pub band in Ireland, and then formed the folk-rock quartet Rusty Belle with her brother Matt, Zak Trojano and Jazer Giles in 2006.  At home singing everything from gritty electric soul to tender country blues, she has added her harmonies to records by Chris Smither, Jeffrey Foucault, Caitlin Canty, Hayward Williams and The Suitcase Junket.

Next Stage is located at 15 Kimball Hill in downtown Putney, VT.  Tickets are $22 Advance / $25 At the Door.  For information, call 802-387-0102.  Advance tickets are available at www.nextstagearts.org, Turn It Up in Brattleboro and the Putney General Store in Putney.  Next Stage will provide a beer and wine cash bar.  For more information, visit www.thesuitcasejunket.com, www.katelorenzmusic.com,  www.twilightmusic.org and www.nextstagearts.org.