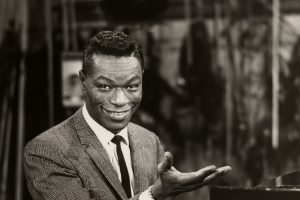 This year’s gala will feature the arrangements of songs made famous by Nat “King” Cole, who was recognized as “one of the most influential entertainers of the 20th century” by National Public Radio. The Grammy Hall of Famer was a superstar of his time: he recorded over 150 Billboard singles and sold over 50 millions records. Cole knew he was destined for a life of music – he dropped out of high school at the age of 15 to tour as pianist in his brother Eddie’s trio and he never looked back. Cole’s vocal prowess has perhaps eclipsed his extraordinary achievements as a pianist, but his contributions on the piano indelibly influenced other piano giants at the highest level. The legendary pianist Oscar Peterson, quoted in the liner notes of one of Cole’s albums, claimed: “Nat’s at the very top…He belongs in the same company with the pianists he idolized – Earl Hines and Art Tatum. They were magicians, but he had something more than magic; he had restraint…Every one of us who followed him, from Bud Powell to Bill Evans, has been deeply influenced by his relaxed sense of melody and especially his rhythmic genius.”

Cole started recording in 1940 at the age of 21. In 1944, he was chosen by jazz empresario Norman Granz to appear as pianist in his first Jazz at the Philharmonic tour along with all-stars Illinois Jacquet, J.J. Johnson and Les Paul. In 1946, Cole became the first African American to host his own syndicated radio program. Ten years later (in 1956), he went on to become the first African American to host a weekly television variety show. Guests on his show included Harry Belafonte, Tony Bennet, Ella Fitzgerald, Peggy Lee and Mel Tormé. As a performer, Cole went on to win a Grammy and release dozens of recordings, including three Spanish-language albums that were extremely popular throughout Latin America.

Cole endured a lifetime of racist conflicts that included run ins with the KKK and an onstage assault in Birmingham, Alabama. He found it challenging to balance his role as an entertainer playing in an integrated band for a racially segregated society. He was constantly searching for ways to support the African American cause while still catering to a diverse audience. Cole enjoyed enduring relations with important figures throughout the social strata including a wide array of musicians and politicians. As an indication of his prominence in society, after his death of lung cancer at age 45, his honorary pallbearers included Robert F. Kennedy, Frank Sinatra, Count Basie, Johnny Mathis and Sammy Davis Jr.. Jack Benny delivered his eulogy.  Cole’s lasting legacy is assured thanks to the hundreds of beloved recordings he released including “Mona Lisa,” “Unforgettable,” “L-O-V-E,” “The Christmas Song,” “Route 66,” “Nature Boy,” and “Sweet Loraine.”

On the more contemporary side, Eldridge is also a member of the vocal group MOSS, alongside Kate McGarry, Theo Bleckmann, Lauren Kinhan and Luciana Souza (and now Jo Lawry). Some of Eldridge’s notable performance collaborations include projects with Bobby McFerrin, Fred Hersch, Becca Stevens, George Benson, Michael Brecker, David Byrne, Jonatha Brooke, Kurt Elling, the New West Guitar Trio, the Swingles, Anat Cohen, Karrin Allison, Paula Cole, Jon Hendricks, and Mark Murphy.  As an educator, Eldridge was head of the Manhattan School of Music’s jazz voice department for eighteen years and is now Professor of Voice at Berklee College of Music in Boston.  All About Jazz has said that “[h]is is the true voice of understanding, speaking on its own terms while also capturing and expressing the emotions that we all feel.”

The VJC Big Band is fortunate to have board member Rob Freeberg guiding it as its musical director. Freeberg moved to Dummerston, VT in 2012, after retiring from his position as Director of Bands at New Rochelle High School, NY, where he taught for 30 years. He also directed the Rob Freeberg Big Band, and the Iona College Pep Band. Freeberg was selected as guest conductor for several all-county and regional music festivals in NY including performances at Lincoln Center. Along with his numerous offerings at the Vermont Jazz Center, Freeberg performs with the Windham Orchestra and its brass quintet, and the chamber orchestras accompanying the Bennington County Choral Society and Keene Chorale.

The VJC is especially grateful for the generosity of stalwart supporters Dianne and Steve Lieberman who for several years have underwritten the Big Band’s musician’s fees and served as concession organizers for this uplifting event. Their continued production support is something the VJC is ever grateful for. The VJC is also grateful to the Brattleboro Reformer, Holiday Inn Express, WVEW, WVPR and WFCR and WKVT and thanks Tavernier Chocolate, Top Tier Bakery, Amy’s Bakery, the Brattleboro Food Coop, Mocha Joes, the Vermont Country Deli, and Taylor for Flowers for their generous donations to make the complimentary concessions possible.

Be sure to mark Saturday, December 7th, on your calendars and polish your dancing shoes to prepare for this fun evening. Make your reservations early, as this concert always sells out quickly. Admission, which includes a delicious complimentary dessert buffet, is $25+ general (dancing encouraged, chairs will be fewer than attendees) or $30+ for reservations that include reserved table seating (table spaces are limited). Tickets for The VJC Big Band performing the music of Nat King Cole at the Vermont Jazz Center are available at In the Moment in Brattleboro, online at www.vtjazz.org, and by email at ginger@vtjazz.org.  Tickets can also be reserved by calling the Vermont Jazz Center ticket line, 802-254-9088, ext. 1. Handicapped access is available by calling the VJC to schedule a time for one of our staff to meet your party by calling 802 254 9088, ext.1 and leaving a message.

When I Fall in Love https://www.youtube.com/watch?v=GfAb0gNPy6s

Straighten up and Fly Right https://www.youtube.com/watch?v=6fVaP6dM1fs

You Make Me Feel So Young – https://www.youtube.com/watch?v=SUkRXjyOZf8

But Not For Me https://www.youtube.com/watch?v=qM3paHzg1-0