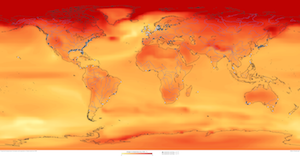 So says an 86 year old scientist named Mayer Hillman in a new article at The Guardian. It’s well worth a read.

A few of his quotes about runaway climate change:

“The outcome is death, and it’s the end of most life on the planet because we’re so dependent on the burning of fossil fuels. There are no means of reversing the process which is melting the polar ice caps. And very few appear to be prepared to say so.”

“I’m not going to write anymore because there’s nothing more that can be said,”

“With doom ahead, making a case for cycling as the primary mode of transport is almost irrelevant,” he says. “We’ve got to stop burning fossil fuels. So many aspects of life depend on fossil fuels, except for music and love and education and happiness. These things, which hardly use fossil fuels, are what we must focus on.”

“Even if the world went zero-carbon today that would not save us because we’ve gone past the point of no return.”

“Standing in the way is capitalism. Can you imagine the global airline industry being dismantled when hundreds of new runways are being built right now all over the world? It’s almost as if we’re deliberately attempting to defy nature. We’re doing the reverse of what we should be doing, with everybody’s silent acquiescence, and nobody’s batting an eyelid.”

(2017, you may recall, was the year by which we were supposed to have made the drastic changes to limit warming. We didn’t, and are past that now.)

The good news, he says, is that like a patient given a terminal diagnosis we may decide to try to prolong our lives. Acknowledging impending doom might be the realization needed, he thinks, to get us to do something.