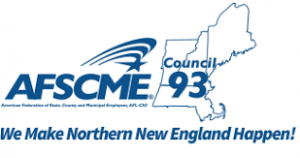 UNION ACTION ALERT: Castleton DPW workers with AFSCME Local 1201 of the AFL-CIO (those that plow the roads and operate the wastewater plant) have been without a contract or raises for over two years.  While these Union members continue to fight for justice, we need to let the Castleton Select Board know THIS IS NOT OK and Local 1201 does not stand alone (and that Vermonters from all over the state stand with them).  Please contact the Castleton Select Board today and leave a message for Selectman Jim Leamy.  Tell Jim: “Jim Leamy, I am a working Vermonter too, and I stand with DPW Union employees.  Fair contract now!”

And/or send a message by email at: administration@castletonvt.org

By Standing together, we are all UNION STRONG.

As we all get ready to brace for another Vermont winter, imagine for a moment that you were the person your neighbors relied on to be ready at a moment’s notice to clear the roads of snow and ice.  Imagine that while they were going about their lives, they would expect you to be at home waiting by the phone, ready to forgo any personal business or problems and head out the door in sub-zero temperatures to answer the call for help.  It wouldn’t matter if it was 3:00 AM on Christmas morning. It wouldn’t matter if you had to work 16 hours straight to get the job done. Your neighbors would be counting on you, and it would be your responsibility to get the job done. And when all that snow and ice melted, they would be relying on you again to repair the roads that were chewed up over the long winter and handle a number of other critical jobs.

Of course, you would expect to be compensated for your work, and hopefully receive some reasonable pay increases over time to help you and your family keep pace with the cost of living. But now imagine that your neighbors came to you and said they wanted to make deep cuts in your net pay going forward and even refund them some of the money they have paid you over the past two years.  The dedicated, hard-working members of the Castleton Department of Public Works don’t need to imagine this scenario.  They are living it – right now – thanks to James Leamy and his colleagues on the Castleton Board of Selectmen.

Driven by Leamy, the board is refusing to execute a new contract with these workers, opting instead to stonewall them for more than two years in contract negotiations in an effort to force wage and benefit concessions that would result in a severe cut in their real take home pay.  That’s right. Despite the fact that many of these workers only earn $15.00 dollars and change per hour (some as low as $11 and change), Leamy wants to them to accept drastic, deep cuts in the net money they use to support themselves and their families!

It’s important to note that the union (AFSCME Local 1201) has offered to accept significant concessions that would in fact, result in a reduction in take home pay. We agreed to nearly triple our health insurance contribution rate in exchange for a modest two-percent pay increase in 2016 and again in 2017.  But that wasn’t nearly enough for Leamy, who ironically enjoyed steady pay increases and affordable quality healthcare coverage as a member of his teachers’ union for many years (a union which represented him well).  Leamy is demanding we pay four times as much for our healthcare and at one point, actually wanted the workers to pay that increase back to the town retroactively for the two years.

Despite the fact that these workers haven’t received any pay increase for two years, Leamy’s last offer was a five-percent increase spread out over the next few years (with no increases accounting for 2016 and 2017), coupled with a three-hundred percent increase in out-of-pocket healthcare costs for the workers.  Leamy also wants us to dismantle the system that provides workers with time-and-a-half overtime pay for working those middle of the night snow-plowing shifts, and make cuts to vacation time going forward.

Adding insult to injury, Leamy and the board have also gone back on their word.  At the onset of negotiations, the town and the union were agreeable to a set of ground rules that included a provision to use a neutral arbitrator (if necessary) to help settle our differences.  They also agreed to refrain from what is known as regressive bargaining, which prohibits either party from moving backwards from formal proposals made during negotiations. They broke their word on regressive bargaining a long time ago. And recently, Leamy and the board broke their promise on another ground rule by refusing to use an independent arbitrator, presumably because it was not their best interests to have their shameful tactics reviewed by a neutral party.

For these reasons, AFSCME Local 1201 has filed two Unfair Labor Practice charges with the state.  The first charge calls for Leamy and the board to honor prior proposals built around modest wage increases and more reasonable increases to employee healthcare costs.  The second, calls on the state to force the board to abide by their pledge to use a neutral arbitrator.

We ask readers to share their thoughts with Leamy by phone at 802-468-5319 or by email administration@castletonvt.org