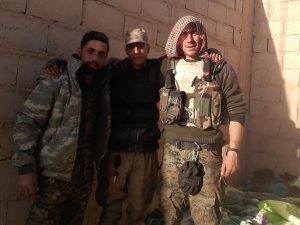 Waterbury Vermont, February, 2019 – Michael Alexander, a guest of the Green Mountain Central Labor Council AFL-CIO, recently spoke to Equal Time Radio (WDEV 550AM) about his experience serving as a volunteer soldier in the YPG. The YPG & YPJ are the military arm of the revolution in the northern Syria.  The revolution, which is ideologically influenced by the writings of the Vermont philosopher Murray Bookchin, is seeking to establish a secular Town Meeting-like direct democracy in Rojava (Syria).  Alexander, a native of Ohio USA, served as a heavy machine gunner on the Raqqa front.  Presently hundreds if not thousands of foreign nationals, like Alexander, serve within the YPG & YPJ’s international brigades. The YPG/YPJ continue to drive back islamo-fascist ISIS forces in the southeast while also defending their northern border from Turkish aggression. To their west the Assad regime also represents a threat. The scope of what the YPG/YPJ seek to establish in northern Syria is not dissimilar to what the CNT & FAI sought to achieve in Spain during the Spanish Civil War (1936-1939).

The Green Mountain Central Labor Council of the AFL-CIO (CLC) passed a resolution in February of 2018 declaring their unwavering solidarity with the YPG/YPJ and the democratic & equitable society that the revolution aims to achieve. As part of that resolution, the Central Labor Council pledged to provide three months of room and board to any returning American volunteers who served with the YPG/YPJ and who choose to come to Vermont.  The CLC also committed to working with volunteers (who avail themselves of this offer) to find them Union jobs.  Michael Alexander is being supported by the Central Labor Council as a result.

Here is a link to the Green Mountain Central Labor Council’s resolution on the YPG/YPJ:

Listen to Alexander discuss the revolution in Rojava on WDEV’s Equal Time Radio by clicking on the below link: