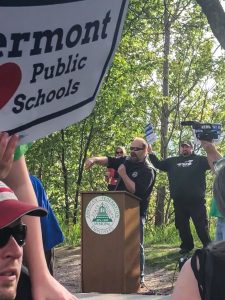 The demonstration was electric! Speakers included AFSCME Local 1343 President Damion Gilbert, myself [VT AFL-CIO District Vice President/AFSCME Local 2413 member David Van Deusen], IBEW Organizer Danielle Bombardier, President of APWU-Vermont President Omar Fernandez, and many other Labor and community leaders (*see below for full list of speakers). AFSCME member and Burlington Schools Chapter Chair Dwight Brown did an awesome job MC’ing the event. While speakers touched on many issues, all were pro-Labor at core [like Vermont says NO to Union-busting; Labor is strong when we stand united; working people need to make a livable wage of $15 an hours NOW; & the politics of the status quo as well as those of the anti-Union right shall be resisted and overcome]. Picket participants came from the 36 endorsing Unions, the 20 endorsing community/political organizations, as well as from members of the Professional Fire Fighters of Vermont, IATSE, Vermont’s Lt. Governor David Zuckerman-Progressive, Burlington Mayor Miro Weinberger, State Rep Brian Cina-Progressive, and many City Council members and a number of other elected officials.

Today was a great day for Vermont’s Labor Movement. Make NO mistake.  We delivered a POWERFUL statement to those who would oppose us: Labor is strong and is stronger still when we stand united with our political & community allies! However, this CANNOT be just one day…

May 30, 2019 needs to be the start of the building of an effective movement here in Vermont which is capable to addressing the social, economic, & political challenges facing working class people during these trying times. And here, this movement needs to understand that our power, our true power, is not in DC or Montpelier; it is in our shops, in our communities, in our neighborhoods, on the streets, and in our Unions!

So again, thank you to all who came out today to show that we are UNION STRONG. Let us come together again soon to begin the hard work of building that movement which our times are calling for. TOGETHER WE WILL WIN!

*Picket speakers were as follows: