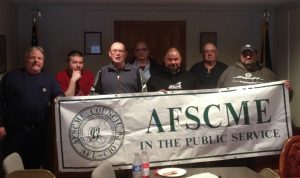 Rutland, Vermont, 2019 –The Vermont Republican Party has invited former Union-busting Wisconsin Governor Scott Walker to talk at a private fundraiser on May 30th, in Burlington at the Hilton Hotel on Battery Street. And while Vermonters are struggling to win a basic $15 an hour livable wage for all, wealthy VIP donors will be paying $1000 a seat to hear how Vermont too should follow his anti-Union lead. This is unacceptable.

Scott Walker is rabidly anti-Union. While Governor he rolled back foundational Union rights for workers in Wisconsin, making that state “right to work,” and essentially stripping all meaningful collective bargaining rights away from public sector workers. He also forced public sector Unions to have annual re-certification votes (which is aimed at draining Labor resources and de-unionizing 10,000s of workers). At the same time, Walker implemented massive tax cuts for the richest 1%. Scott Walker is an enemy of Unions and an enemy of working class people. AFSCME is here to say he and his ilk are NOT welcome in Vermont!

AFSCME Vermont unequivocally condemns those specific persons who believe it is appropriate to invite Walker to our State. We further express our disappointment and displeasure in our Governor, Phil Scott, for agreeing to attend this anti-Union fundraiser. Union busting shall not be tolerated in Vermont.

Therefore, AFSCME Vermont shall organize picket lines outside the Burlington Hilton on May 30th, timed to coincide with Walkers appearance. We further call on Vermont Labor Unions, and allied community organizations to sign on to this call for pickets and to mobilize its membership to resist! And here we ask that those that sign-on contact us so we may add your organization’s name to this statement, and so that we can coordinate with you concerning the details of the pickets as the event draws nearer.

On May 30th, let’s send Walker an unavoidable message that working Vermonters stand united in defending our rights. We will roll over for nobody. Send Walker packing!

Also Endorsed [as of 5/3/19] by the following Unions/community allies: