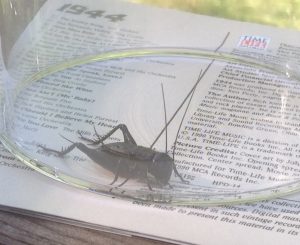 At first, I thought our cat was bringing them in.  There seemed to be a cricket in every corner — crickets behind the bookcase, crickets in the sink, crickets behind the refrigerator, all chirping away.  As fast as we could catch them and put them back outside, more would arrive.  One cricket even had the temerity to hop back in the moment his feet hit the welcome mat on the other side of the door.  What was up with the crickets?

As it turns out, there is a logical answer — cooler nights.  Our cat, much as he enjoys playing with them on the living room carpet, was not bringing all these crickets into the house.  The crickets were coming in on their own.

After a brief session of internet research, I was able to confirm that crickets do indeed seek warmth and shelter in the fall, so much so that one of the top results for “crickets in the house” is exterminators.  In fact, our local crickets are harmless in small numbers, to there’s no need to exterminate them.  Encouragingly, the second most common search result is stories about keeping crickets as pets.

It’s this tendency of crickets to come into people’s houses in the fall that accounts, no doubt, for such literary treatments as Dickens’ The Cricket On The Hearth and the character Jiminy Cricket in Disney’s Pinocchio.  And it’s a short step from there to keeping them as pets, which the Chinese did at one time, keeping them in little cricket houses and feeding them tidbits.  Something about their companionable chirping appeals to many humans, or it did once upon a time.

And what chirping it is!  In Cricket On The Hearth, Dickens describes it (in characteristically complex Victorian fashion) as having “a voice so astoundingly disproportionate to its size…that if it had then and there burst itself like an overcharged gun…and chirruped its little body into fifty pieces, it would have seemed a natural and inevitable consequence, for which it had expressly laboured.”  In other words, crickets are loud.

To this I can attest.  The first cricket to make his way into the house this fall (and yes, it was a he, because only male crickets chirp) burst into song around 2 o’clock in the morning where his central location and declamatory tone reverberated throughout the house.  “Good grief,” I thought, “crickets do not have an indoor voice.”  And then I went back to sleep.

But as loud as crickets are, they’re surprisingly sensitive to vibration themselves.  All you have to do to make a cricket stop singing is walk noisily into the room where they’re hiding.  You will be rewarded with instant silence — until you walk back out.

Unlike the fairy tales cited above, crickets do not tend to fare all that well in houses with cats, or even cat-less houses for that matter.  We have removed several very inert looking crickets, who may have been suffering as much from dehydration as from skirmishes with our furry feline monster.  But in the process of repatriating crickets, I’ve noticed that inertia does not always mean the little guy’s a goner.  In at least one case, I was able to observe what may have been an example of an insect playing dead.  It happened like this:

While washing dishes one night, I noticed a cricket in the sink.  Concerned for its welfare, I tried to scoop him up but he was terrified, and scuttled away from me, evading capture.  Finally I was able to back him into a corner, and this is where things got weird.  He cringed noticeably, squinching away from me as far as he could go, and then, just like that, he keeled over dead.

I felt bad for Mr. Cricket, and guilty for having scared him to death like that, so instead of putting him out into the cold evening air, I deposited him on the on the unlit stove by the back door to see if he would revive.  Sure enough, when I got up the next morning, the “dead” cricket was gone and a living cricket was on the floor below, inches from the hearth no less.  I put him into the bug-rescuing cup, as is our custom, and took him outside to warm up with his fellows.

Needless to say, crickets are not immortal.  Although some overwinter in sheltered areas, many expire by the end of the fall season.  George Selden hints at this fact of cricket life in his book The Cricket In Times Square.  When the first autumn leaf falls, our hero, Chester the musical cricket, sees the leaf and suddenly feels an irresistible urge to return to his home, a field in Connecticut.  “It’s where I belong,” he says, and he should know.

The crickets sing long and loud this time of year, adding a bright tone to the mellow days of autumn.  But as the season advances and the temperatures fall, their song will slow into the silence of winter.  But not to fear! Our cricket friends will be back next summer, brightening our lives with their cheerful chorus, indoors and out.

Photo note:  As soon as a cricket presents himself and agrees to be photographed, I’ll include that photo here. Not one hour after posting this story, a cricket did in fact appear in the living room by the stove, so naturally I rescued him and took a picture for the record. He did not love it, but he’s fine now, safely outdoors.