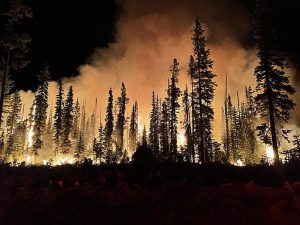 Unless you’ve really been living in deep media seclusion, you probably already know the planet is in big trouble. The planet’s troubles, expressed as record heat waves, epic wildfires, prolonged droughts, biblical rainstorms, and erratic weather patterns, have led to all kinds of disruption here below.  Mother Nature isn’t just angry — she’s in crisis.  Which isn’t surprising since humans have been systematically trying to kill her off pretty much since the dawn of mankind.  Clearly she can’t take it anymore.

But elaborate metaphors aside, I’ve been worrying more than usual about the state of the environment and the decline of the natural realm, from the changing climate to the alarming loss of wildlife around the world.  Although it’s easy to forget these things living in Vermont, we do not live in a bubble.  Here and there we experience reminders that things are not right with our planet.  The smoky air a couple weeks back was one — we got so much smoke from forest fires on the west coast that it took our air quality all the way to the worst level, the dreaded Red zone.  And while we do have more wildlife than in many places, even here species are taking a hit.  Bird populations are down almost 15% since the mid 1990s, with the flycatchers and other bug eaters declining a staggering 45%.  This last is especially sad for me as I am a huge fan of the Eastern Wood Phoebe, one of the birds in the aerial bug eating category.

The decline of insects, due to chemical use and other factors, is contributing to the decline of bird populations.  A study at UVM revealed that over 50% of our bee species, for instance, have disappeared or are dropping steadily.  Globally, over 40% of insect species are either in decline or outright endangered. Since insects are low on the food chain, they are vital to the continued existence of all species that feed on them such as birds, amphibians, and small mammals.  If insects go, the insect eaters are next, and on up the food chain.  Humanity could probably survive with the aid of some (no doubt profitable) technologies but who really wants to live in a world without nature?

The depressing numbers continue across the entire spectrum of the non-human world, from the creatures that live in the increasingly polluted oceans and fresh waters to land creatures from every kind of habitat, all under threat. Despite being one among many in the animal kingdom, homo sapiens has had a profoundly negative impact on the planet.  Unfortunately, no matter how irrational our disregard of nature is from a survival perspective, we show no signs of stopping.  We — meaning our unresponsive leaders — seem to think that by ignoring the problem it will go away.

All things considered, it’s enough to depress even the most stubborn rationalist, were the stubborn rationalist to actually look at the facts on the ground which are abundantly available.  Although not a stubborn rationalist myself, I have definitely been saddened by what I see happening to nature, while at the same time feeling powerless to do anything about it.  Then I read a story on Counterpunch, inspiringly titled “The Apocalypse is Now.”  I decided that morning that there had to be something we people could do on our own that might help.  Despite the possible futility of this notion, it did make me feel somewhat better.

So for what it’s worth, here is a list of a few things regular people can do on their own to help the planet.  Not all of them are easy, but they’re worth considering as things we can do ourselves.  Even though it may not feel like much, small things can add up fast when many people do them.

That’s it!  If you can think of some other “anyone can do it” ideas, please add them as comments below.