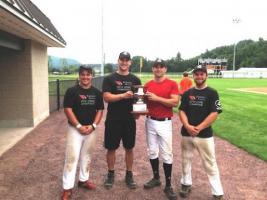 The joy of winning the Connecticut River Valley Baseball League championship for the second straight year turned to shock and sadness for the Claremont Cardinals and the rest of the league as Cardinal catcher Jon Ferrero was fatally injured and outfielder Justin Pierce was seriously injured in a pickup truck crash in the players’ hometown of Woodstock, Vt. The accident occurred just hours after the Cardinals defeated the Walpole Wild Blue to win the CRVBL Cup.

“The Connecticut River Valley Baseball League is so saddened by this accident up in Woodstock, ” said Gary Dennis, league coordinator for the CRVBL and manager of the Walpole Wild Blue. “The Cardinals are a bunch of great guys and good ball players. It was our honor to play against them on Sunday…our hearts go out to Jon and Justin’s friends and families and the rest of the Claremont ball club.”

Claremont Cardinals manager Gerry Thompson said: “On Sunday the Claremont Cardinals family suffered a terrible tragedy. Our thoughts and prayers are with the families of Jon and Justin. Those two men were inseparable as brothers off the field and indispensable to the success of our team.

We are going to miss Jon’s grit, smile, and fierce spirit but are ready to support Justin in his recovery.”

Claremont beat Walpole, 6-5, Sunday afternoon in a nail biting finish to the CRVBL Cup tournament. Home team Walpole had the tying run on third and winning run on second with only one out, but Claremont turned a game-ending double play. Claremont advanced to the final game by beating regular season leader Chester/Saxtons River Crush, 6-2, on Saturday. Walpole won its semifinal against the Sunapee Old Lakers, 7-2.

(The attached photograph is of Claremont Cardinal Players (L to R) Justin Pierce, Bob Myers, Jason Tarleton and Jon Ferrero with the CRVBL Cup following Sunday’s win by Claremont in the CRVBL Championship Game. Hours after the photo was taken, Pierce and Ferrero were in a vehicle crash that took the life of Ferrero and injured Pierce)