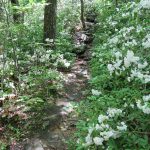 On Wantastiquet, the trail is dry and the mountain laurel is blooming. On June 23, 2021, there was no water on the carriage road trail up to the summit. Not even a puddle. Really, things are that dry. You can wear sneakers. And the mountain laurel will be in bloom for another week. Invasive mountain laurel is everywhere on Wantastiquet, unfortunately, but it sure is pretty for these two weeks. It doesn’t bloom well at lower elevations, so you won’t see blossoms until the 7th hairpin turn (out of 9). The blossoms are much better if you continue past the summit towards Mine Ledge. (The trail after the antenna tower is narrow. I found a tick on my arm within three minutes. Past the summit, tick precautions are necessary.)

The view from the summit is disappointing now. The scruffy oak trees were last cleared out in 2009. Now they block most of downtown Brattleboro. Instead, you should take the side trail at the 6th hairpin turn to see the view from the lower lookout–the preferred spot for Brattleboro panoramas for 165 years. I’ve posted the two panoramas I took today on iBrattleboro’s photo section. It was a post-thunderstorm morning with low humidity–perfect for a photo. There’s even some mountain laurel in bloom on that side trail. That outcrop will have good blueberries in two weeks. 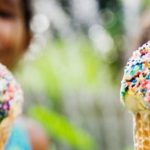 Youth Services has once again created a  downloadable spreadsheet of all camps in Windham County as a service to area families.

“Our Summer Camp Listing gives parents and grandparents a listing of all the options in one convenient location,” notes Russell Bradbury-Carlin, Youth Services’ Executive Director. “We’ve been doing this for years as a service to local families.”

BRATTLEBORO, Vt. — Vermont’s Harris Hill Ski Jump is canceling its February 2021 competition due to the Covid-19 pandemic and turning its attention to planning for its centennial in 2022.

“We considered the enormous health risks to the jumpers, coaches and judges coming from around the country and overseas,” event co-directors Kate McGinn and Liz Richards said. “Those risks would extend to the hundreds of volunteers who staff the competition and the thousands of spectators who come from all over New England.”

The Brattleboro Recreation and Parks Department is pleased to announce that the Living Memorial Park Pool / Rotary Water Playground will be opening for the season on Saturday, June 20th, 2020 at 1:00 p.m. Priority will be given to Brattleboro Residents and will be open to Non-Brattleboro-Vermont Residents as space allows. Due to COVID-19, the pool schedule, fees, and procedures have been updated.

Pool Reservations: Pool reservations will be taken daily beginning at 10:00 a.m., and reservations can only be taken at the swimming pool by calling (802) 254-6700. Only 25 people including staff will be allowed into the gated area at a time. Please note that only same day reservations will be accepted, and you can only reserve one time slot a day. Additional slots may be available by calling the Pool after 2:30 p.m. When making a reservation you will be required to provide your address, phone number and first and last name of everyone in your reservation party. If all time slots are full you can add your name to the waiting list in case of no shows or cancellations.

It would seem that Major League Baseball (MLB) would have been able to figure out how to resume their season without fans in the stands by now. They have nearly unlimited financial resources and they certainly have the personnel to work on solving all of the logistical problems that have to be dealt with. Players have made comments that they would find it difficult to play without fans, but if they really had a love for the game they would realize that the fans would adjust temporarily. They owe it to their fans to make a better effort.

Professional sports in this country are driven by obscene salaries and, no matter what well-intentioned people might say, money rules. Consider these numbers. 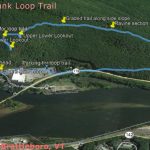 There’s a beautiful, unknown 3-mile loop trail on Wantastiquet. I discovered it a few years ago. I’ve pushed fallen branches to the side, so now it’s sort of possible to follow it. I’ve posted a GPS track “kmz” file here that can be used on a smartphone to help stay on the trail, www.danaxtell.com/Wantastiquet_Flank_Loop.kmz . Google Earth will show this track as an overlay.

The trail goes nowhere near the summit, but does visit the best panoramic lookouts on the mountain—the ones that photographers have been using for 170 years. The loop is possible only because there is a carefully graded trail and retaining wall through the rockslides on the steepest section. I have never seen a mention of this stretch of trail. I found it while exploring the various lookout points in the area. It’s a mystery.

Blaz Pavlic, performing for a crowd of several thousand spectators, retired the event’s Winged Ski Trophy by topping the field for a third year after victories in 2017 and 2019.

“I’ll find a place for it,” Pavlic said of the weighty trophy that has only been retired by five other jumpers in the venue’s nearly century-old history.

BRATTLEBORO, Vt. — A young Slovenian topped a field of 45 of the world’s best up-and-coming ski jumpers Saturday on the first day of this weekend’s Harris Hill Ski Jump.

Blaz Pavlic, 21, won the most total points in front of a crowd of several thousand spectators, with Simon Viehhauser, 18, of Austria second.

The Guilford Free Library has announced that the 10th anniversary “Send A Kid to Camp” raffle is now underway. Community support of the Library through the raffle over the past nine years has raised almost $17,000 and has helped to make summer camp a possibility for hundreds of local kids who might otherwise have missed out on the experience.

Tickets are $10 each and the prize is a $200 gift certificate to T. J. Buckley’s restaurant in Brattleboro. 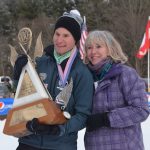 Marlboro College graduate Chris Lamb, winner in 2010 and 2013, and Blaz Pavlic of Slovenia, winner in 2017 and 2019, will be among the 26 male and nine female athletes from North America and Europe slated to leap off a 90-meter hill that’s one of just six of its size in the country. 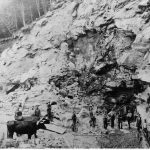 Windmill Hill Pinnacle Association (WHPA) will be leading a walk to the historic sites on WHPA properties in Athens and Grafton on Saturday, Nov.2 from 12:30-3:30.

These historic sites connected with the mining of soapstone include the remains of a mill, slag heap, boarding house for the workers, barn for the oxen, and multiple quarries cuts in the land. While mining there ceased in the early 1900s, there is interesting evidence remaining of this historic industry. Early Grafton pioneers first discovered and quarried this deposit of soapstone in 1784, carving pieces into household items such as foot and hand warmers, ink wells, and hearthstones.

The Brattleboro Recreation and Parks Department is pleased to announce that the Living Memorial Park Pool will be opening for the season on Saturday, June 22nd, 2019 at 1:00 p.m.

In addition to the daily pool fee, there will also be season pool passes available for purchase. Swim Lessons will be Monday-Friday 9 a.m.-Noon, General Swim will be Sunday-Saturday 1:00 p.m.- 4 p.m., 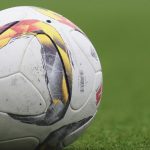 A new camp for middle school girls will run August 5 to 9 this summer, focusing on soccer and leadership skills. Sponsored by the Putney Soccer Club, the camp is open to girls who are completing grades 6, 7 or 8 this spring and will be held on the grounds of Hilltop Montessori School in Brattleboro, VT.

The coaching staff will be drawn from among high school soccer coaches at Brattleboro Union High School and The Putney School.

For many years, I thought being a couch potato was a function of personality — some people are couch potatoes, some aren’t.  I even felt virtuous about how much more productive I was not spending hours laying around watching tv.  It never occurred to me to ask why I was so virtuous until I got a sofa myself, one positioned in a living room with a screen in front of it.  Then I knew — my previous self hadn’t been a couch potato because she hadn’t had a couch. 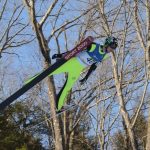 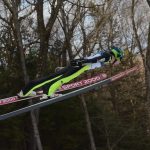 The Retreat Meadows outdoor ice skating across from Grafton Cheese factory outlet store on Rt 30 in Brattleboro: THIN ICE. 3 people fell through today. I saw 2 of them. I organized a rescue for one of them, but then he managed to get out before we had to actually do it, thankfully. 3 people fell through yesterday.

The West River is completely open water with no ice, all the way up to Townshend. This means the water is being warmed by the sun, the whole time it’s coming down the river. 20+ miles. The water is warmer than freezing temperature by the time it gets to Brattleboro, and melts the ice from underneath. This isn’t apparent by looking at the surface of the ice.

The Brattleboro Recreation & Parks Department would like to remind everyone that the Nelson Withington Skating Facility is open for the season and the Public Skating Schedule is as follows. 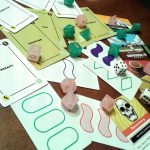 Calling all LGBT+ folk and allies! Join us for card games, board games, and dice games every month at The Root. We have plenty of games, and please bring your favorites as well as a friend or two. Free and open to all ages; 16 and under, please bring a responsible adult. The Root is fragrance-free and has an accessible restroom.