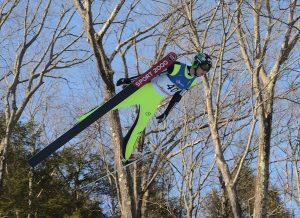 BRATTLEBORO, Vt. — A 20-year-old Slovenian bested 30 of the world’s top up-and-coming ski jumpers Sunday to win the Harris Hill Ski Jump’s annual namesake Fred Harris Memorial Tournament.
Blaz Pavlic, performing for a crowd of several thousand spectators, came within two meters of matching the hill long-distance record of 104 meters he set with his first win in 2017.
“For the hill record, you need a little bit of headwind,” said Pavlic, who jumped this year in calmer conditions.
Xaver Aigner, 16, of Austria placed second and Zak Silih, 23, of Slovenia third.
In the men’s junior division, Evan Nichols, 15, of Lyme, N.H., finished first, with Niklas Malacinski of Colorado second and Erik Belshaw of Colorado third.
In the women’s junior division, Annika Belshaw, 16, of Colorado’s Steamboat Springs Winter Sports Club finished first, with Anna Hoffmann of Wisconsin second and Rachael Haerter of Utah third.
The nearly century-old event featured athletes from eight states, Austria and Slovenia shooting off New England’s only Olympic-size venue at speeds of 60 mph before soaring more than 300 feet in the air.
The late Fred Harris started it all 97 years ago when, after founding the Dartmouth Outing Club as a college student in 1909, he returned to his hometown to create the ski jump — now one of just six of its size in the country — in 1922.
Harris’ daughter, Sandy, presented this weekend’s winners with medals.
Harris Hill boasts a snowmaking system, so the program takes place annually regardless of ground cover in surrounding areas. More information about the ski jump can be found at www.harrishillskijump.com or the event’s Facebook and Twitter pages.
PHOTO CAPTION: Two-time winner Blaz Pavlic soars over Harris Hill to win the second leg of the coveted Winged Ski Trophy at the Fred Harris Memorial Tournament. Pavlic had the longest jump of the day at 334 feet.
PHOTO CREDIT: Dana Sprague
Sally Seymour
Media Coordinator
Harris Hill Ski Jump
603-852-0731