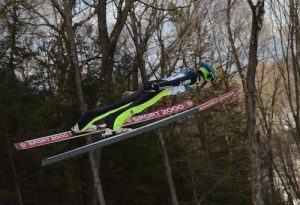 BRATTLEBORO, Vt. — A young Slovenian bested 32 of the world’s best up-and-coming ski jumpers Saturday on the first day of this weekend’s Harris Hill Ski Jump.
Blaz Pavlic, 20, won the most total points in front of a crowd of several thousand spectators, with Xaver Aigner, 16, of Austria second and Zak Silih, 23, of Slovenia third.
In the men’s U.S. Cup, Canden Wilkinson, 16, of Colorado’s Steamboat Springs Winter Sports Club finished first and Hunter Gibson, 17, of Illinois’ Norge Ski Club placed second, even though both experienced falls in the last of their two jumps.
In the women’s U.S. Cup, Annika Belshaw, 16, of Colorado’s Steamboat Springs Winter Sports Club finished first, with Anna Hoffmann, 18 of Wisconsin second and Samantha Macuga, 18, of Utah third.
The nearly century-old event is featuring athletes from eight states, Austria and Slovenia shooting off New England’s only Olympic-size venue at speeds of 60 mph before soaring more than 300 feet in the air.
One hometown jumper, Brattleboro’s Spencer Knickerbocker, not only is competing but also is helping the snowmaking crew maintain the hill.
“It’s perfect,” the 26-year-old Knickerbocker said of the jump’s condition.
The event is set to conclude Sunday with the Fred Harris Memorial Tournament. Gates will open at 10 a.m., with trial rounds at 11 a.m., opening ceremonies at noon and competition at 12:45 p.m. Tickets are $20 for adults, $15 for students ages 6 to 12, and free for children 5 and younger and can be purchased at the gate on online at www.brownpapertickets.com.
More information about the ski jump can be found at www.harrishillskijump.com or the event’s Facebook and Twitter pages.
PHOTO CAPTION: Slovenian Blaz Pavlik soars over Harris Hill to land a 100 meter jump, the longest of the day. It earned him first place in the US Cup Men’s Division. Pavlic won the event two years ago and set a new hill record of 104 meters or 341 feet.
—
Sally Seymour
Media Coordinator
Harris Hill Ski Jump
603-852-0731