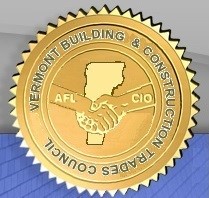 9/21/20, Burlington, Vermont – For the last six weeks, the Vermont AFL-CIO and the Vermont Building & Construction Trades Council of the AFL-CIO have been in active discussions with CityPlace developer, Devonwood to formalize a partnership for phase 1 of the Burlington project. Partnership talks have included the Washington DC based National AFL-CIO Housing Investment Trust (HIT). HIT acts as a financer for major affordable housing projects across the United States. HIT expressed an interest in the project pending approval from HUD. Devonwood is now working with a HIT recommended Mortgage Banker who will assist Devonwood in navigating the HUD process. Once HUD backing is secured, and pending the National AFL-CIO Housing Investment Trust commitment to financing the project, the final development agreement would guarantee that all construction jobs on the CityPlace project be union jobs. The CityPlace project, in its present form, is projected to create 89 affordable housing units (20% of the total), 300-400 construction jobs, with 500,000 labor hours. CityPlace shall also be constructed with strong energy efficiency standards (LEED Gold standard). Phase 1 of the project is estimated to cost $175 million to complete.

Vermont AFL-CIO President David Van Deusen states: “If we are successful in securing National AFL-CIO Housing Investment Trust financing, we will also be guaranteeing that all 400 projected construction jobs will be union jobs providing livable wages, family sustaining benefits, and safe working conditions. The Vermont AFL-CIO cannot understate the magnitude of the positive impact that such a union-led project would have on our local economy over the next two years; especially given the economic crisis and unacceptable levels of unemployment presently suffered among the working class.”

Vermont Building Trades Council President Tim LaBombard states: “Devonwood has worked diligently, productively, and in good faith with us to advance this project towards union funding and creating union jobs. The unions look forward to working not only with Devonwood, but also with the National AFL-CIO Housing Investment Trust, HUD, the Mayor, and the City Council to make sure this project not only comes to fruition, but also that it creates significant apprenticeship opportunities for minorities and women who are in need of work and wish to get into the building trades. Further, by utilizing union labor on this energy efficient housing project, we will be able to guarantee the highest trade standards are adhered to during the construction process. We encourage the City of Burlington to work with us and Devonwood to support this historic effort.”

Devonwood Managing Partner Don Sinex states: “I look forward to working with the AFL-CIO on the financing of our 1st phase of the CityPlace Burlington project, a project that will create jobs for many tradesman and woman, provide needed economic stimulus to our downtown and add desperately needed housing, including affordable housing, to our downtown”

While the Vermont AFL-CIO and Vermont Building Trades recognize that the process to achieve HUD backing and committed financial support from the National AFL-CIO Housing Investment Trust will take effort and cooperation among various parties, Organized Labor recognizes the significant progress already made towards these goals over the last six weeks. The VT AFL-CIO and Building Trades Council is therefore optimistic that this partnership will prove successful and will ultimately be of great benefit to the people of Burlington, union workers within the Building Trades, and the local economy.