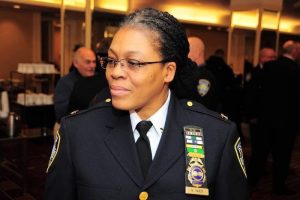 Hardy was appointed by Town Manager Peter Elwell from a strong field of 23 applicants. Elwell and a selection panel conducted screening interviews on Zoom with seven applicants. That panel and a panel of community members each conducted in-depth interviews on Zoom with four semi-finalists. Two finalists had in-person meetings with the Selectboard, Town department heads, Brattleboro Police Department employees, and the Town Manager. Elwell selected Hardy in mid-June and the Town completed a thorough background check before finalizing the terms of Hardy’s appointment and employment.

Elwell said he is eager to begin working with Hardy, both in her role as Police Chief and as a member of the Town’s senior management team. “Chief Hardy brings to Brattleboro a wealth of law enforcement leadership experience and a demonstrated commitment to work with the community on recalibrating the roles and expectations of the police and our civilian community partners,” said Elwell. “She also brings lived experience outside of law enforcement that will help advance the Town’s work on diversity, equity, and inclusion.”

“I can’t wait to get started,” said Hardy, noting that high priorities for her first months as Chief will include police officer recruitment and retention and becoming familiar with Vermont laws and procedures. “What I am most looking forward to is working with Brattleboro’s experienced police officers and engaged community members,” said Hardy, “because the key to achieving community safety is collaboration and mutual respect.”