Brattleboro ~ Meet and greet Police Chief Norma Hardy at Brooks Memorial Library, 224 Main St. this Wednesday, August 18 from 5-7.  Drop by and get acquainted at an outdoor reception to welcome the newest member of the Town of Brattleboro team.

Everyone is invited and refreshments will be served. 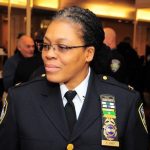 The Brattleboro Citizen Police Communications Committee (CPCC) will meet on Monday, May 24, 2021, at 5:30pm using Zoom (with no physical location due to the ongoing social distancing requirements of COVID-19). The attached agenda contains information on how to access the meeting remotely, including the required “passcode.”

Brattleboro Fire Chief Mike Bucossi has announced his retirement, effective April 1, 2021. Bucossi has served the community in the Brattleboro Fire Department (BFD) for literally his entire adult life. He became a call firefighter in 1975 during his senior year at BUHS and became a full-time firefighter two years later. He was promoted to Lieutenant in 1984, to Captain in 1985, and to Assistant Chief in 2000. He became Fire Chief and Emergency Management Coordinator in July of 2007 upon the retirement of Fire Chief / EMC Chief David Emery.

During his 43-year career full-time with BFD, Bucossi provided leadership at countless incidents. At two of the most memorable and significant, he was the Incident Commander at the Wilder Block fire on December 4, 2004, and at the Brooks House block fire on April 17, 2011. He also was the Operations Officer (second in command under then Town Manager Barbara Sondag) during the flooding caused by Tropical Storm Irene on August 28, 2011.

“After 43 years the end has arrived. I have retired from the Brattleboro Fire Department, effective April 1. It has been a fabulous career and a great honor to work with such a talented, dedicated group. I look forward to quality time with my beautiful wife!”

Brattleboro Civilian Police Review Board Proposal in 2004 and now in 2021?

Submitted: April 2004 to the Brattleboro Selectboard

TEN PRINCIPLES FOR AN EFFECTIVE CIVILIAN REVIEW BOARD

Brattleboro Police Chief Michael Fitzgerald has announced his plans to retire on January 1, 2021 after serving 21 years.

Here is the official news release and resignation letter.

This document presented to the Brattleboro Selectboard by the Civilian Police Review Board Steering Committee in April 2004 is part of a long process to create a CPB in Brattleboro, Vt. Information on CPB is drawn from www.nacole.org, and leading researchers on the issues of CPB.

There is a current call across the nation to defund the police and to use that money for other things such as human services or education:

“Community groups advocating for defunding have put forward differing strategies, some merely opposing police budget increases, others advocating mass reductions, and some fighting for full defunding as a step toward abolishing police forces. Some initiatives are tied to the fight to close prisons. All are pushing for a reinvestment of those dollars in services.”

At 10:36p the shift captain ordered a 2nd alarm be struck, recalling all Brattleboro Firefighters and bringing all Brattleboro apparatus to the scene. An attack line was stretched down the stairwell and the fire in the roof was quickly extinguished. Entry was forced into the basement of 42 Elliot from the stairwell and a fire around a boarded-up window frame was extinguished. No further extension into the building was found. 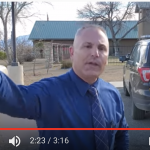 Intoximeters, a manufacturer of breathalyzers used in Vermont, is under criminal investigation in Michigan.

Captain Mark Carignan of the Brattleboro Police confirmed that Brattleboro uses this brand of breathalyzer, and that the use of the machine if coordinated by the state forensic laboratory.

He shared this message from the lab: 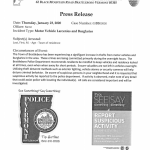 Hi All, I wanted to just share some communication from our Brattleboro Police Department’s Chief Fitzgerald concerning the recent increase in auto larcenies. This comes at my request to let everyone know rapidly that the town is aware of the uptick, is pursuing leads, and some further information on current laws regarding these distressing activities. Also please be aware that I’ve requested that either the Chief or Capt Carignan be present at our next two Selectboard meeting to answer any questions from the public. (January 28th and February 4th at 6:15 pm, Municipal Center)

The Town of Brattleboro would like to remind everyone that the snow emergency ban is in effect.

Snow and ice will be removed from the streets in the downtown area this evening.

Parked vehicles in the downtown district must be removed by 11:00pm or they will be towed at the owner’s expense.

On Tuesday, December 3 at 8:45am the Brattleboro Fire Department and Rescue Inc responded to a West Brattleboro address for a subject that was burned. Upon arrival it was learned that the 55 year old patient was burned while vaping while he was on home oxygen. A flash fire occurred around the face area of the subject and he received burns to his mouth and nose area. He was transported to Brattleboro Memorial Hospital by Rescue Inc for further evaluation and treatment.

The 2020 Brattleboro Fire Department calendars that the VFW Auxiliary Post #1034 produced are now available for $10.00 a piece. You can purchase them at Central Fire Station on Elliot Street. There are only about 12 left, so first come, first served. Please support a great cause. 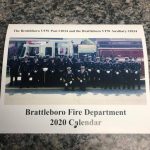 The 2020 Brattleboro Fire Department calendars that the VFW Auxiliary #1034 produced are now available for $10.00 a piece. You can purchase them at Central Fire Station on Elliot Street or the Brattleboro VFW on Black Mountain Road.

At 10:25am Engine 2 & Utility 8 responded to the Power Sub Station just south of the Veterans’ Bridge for a reported transformer fire. Upon arrival they had a significant fire in a large power vault and transformer. An attack line was stretched to the area but the decision was made to let the fire burn due to high voltage electric equipment. Green Mountain Power arrived on the scene shortly after the arrival of the 1st fire apparatus and got the power killed to the sight and the fire burned out approximately 15 minutes after that.

At 7:38am Central Dispatch received a call reporting smoke in the building at 929 Western Ave. A 1stalarm assignment consisting of Eng 2, Eng 4, Ladder 1 and Car 1 & 2 responded. At 7:41am Eng 4 reported there had been a fire in the bathroom of Apt 202 which was out, and they had a burn victim and requested an ambulance.