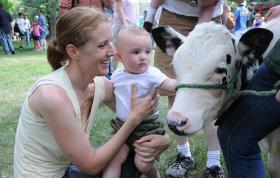 The Strolling of the Heifers has been named one of the Top 10 Summer Festivals in the United States by Livability.com, a national website that ranks quality of life and travel amenities of America’s small and mid-sized cities.

In the announcement, Livability editor Matt Carmichael said, “The best summer festivals not only encourage tourism, but also engage and inspire residents. That community spirit drives the festival’s success and is often reflected in the festival’s character.”

Strolling of the Heifers has celebrated farmers and advocated for local foods since 2002 with its annual agriculturally-themed weekend festival, taking place in Brattleboro June 7-9 this year. The festival’s centerpiece is the Strolling of the Heifers Parade on Saturday, June 8 followed by the all-day Slow Living Expo featuring local food, fun, entertainment and educational exhibits.

For the 2013 list, Livability editors looked for those summer festivals most connected to their host cities’ identities in terms of theme, the experiences to be had and community participation. Editors also factored in the region’s other tourist attractions and amenities that may enhance the itineraries of festival-goers.

Proceeds from all Stroll events currently benefit the Vermont-wide Strolling of the Heifers Farm-Food Business Plan Competition, which offers $60,000 in prizes to encourage innovation and entrepreneurship in Vermont’s agricultural and food production sectors. The finals of the competition, held in partnership with Vermont Technical College, will take place at Brattleboro’s Marlboro College Graduate Center on Wednesday, June 5.

In the past, Strolling of the Heifers has also provided microloans for farmers, offered educational grants to teachers, and launched a youth internship program at local farms. All of these programs have been carried on by other organizations.

Recently, Livability also named Brattleboro as one of the Top 10 Small Towns in the United States.

Here is the full list of Summer Festivals chosen by Livability: